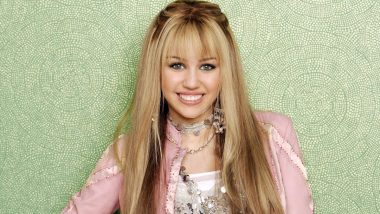 31American singer Miley Cyrus recently opened up about the identity crisis' she suffered after playing the role of Hannah Montana in Disney Channel's famous sitcom Hannah Montana. As per E! News, in a recent interview with Spotify's Rock This with host Allison Hagendorf, the 'Plastic Hearts' hitmaker spoke about how her early days of fame on the popular show in which she played a teen also named Miley who had a secret identity as a superstar, messed with her head. Miley Cyrus Opens Up On Why She Loves Being With Women More Than Men, Says ‘Girls Are Way Hotter’.

"Talk about an identity crisis," she said of playing the titular role of the regular teen by day, pop star by night on the show for seasons from 2006 to 2011.

"I had gone from being a character almost as often as I was myself. And actually, the concept of the show is that when you're this character, when you have this alter ego, you're valuable. You've got like millions of fans, you're like the biggest star in the world. Miley Cyrus Shares Tribute Video After Beloved Dog Dies from Cancer with ‘Multiple Tumours’.

And then the concept was that when I looked like myself when I didn't have the wig on anymore, that no one cared about me. I wasn't a star anymore," Cyrus said. "So, that was drilled into my head. Like, without being Hannah Montana, no one cares about you. And that was the concept," the singer added. Cyrus said she "really had to break that" mentality, adding that her album 'Bangerz' was her first foray into finding her identity outside of the popular Disney channel character.

She said, "And so I really had to break that and I think that's maybe why I almost created a characterized version of myself at times. ... I never created a character where it wasn't me, but I was aware of how people saw me and I may be played into it a little bit." In a December interview with Rolling Stone, Cyrus said that she "felt like I was never going to amount to the success of Hannah Montana," adding that she "had to evolve" because the character was "larger than life."

She added, "Really, Hannah Montana was not a character. The concept of the show, it's me. I've had to really come to terms with that and not be third-person about it." Cyrus has still been able to look back on her Hannah Montana days with a lighthearted lens. Earlier this week, Cyrus joked around about the character on social media with Lil Nas X and Megan Thee Stallion.

The singer paid homage to her former alter ego in a TikTok duet with Nas X and a tweet about a collaboration with Megan.