Miley Cyrus Opens Up On Why She Loves Being With Women More Than Men, Says 'Girls Are Way Hotter'

"Everyone I think can agree that from ancient times d**ks make wonderful sculptures. Other than that, I’m not as interested," said Miley in her recent interaction. 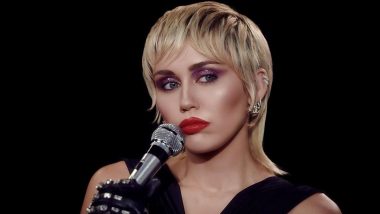 Miley Cyrus stayed in news for one too many reasons since the summer of 2019. Following her split with husband Liam Hemsworth, the singer was then spotted romancing her girlfriend, Kaitlyn Carter and then her boyfriend, Cody Simpson. While the singer is currently single and may jump into a relationship if someone interesting comes her way, she recently elaborated on why she prefers being with women than men. Being a bisexual, Cyrus has explored her relationships with both the genders and if asked to compare, she'd pick girls over boys. Miley Cyrus’ Marriage with Liam Hemsworth Had Too Much Conflict?

"Girls are way hotter. We know this,” Miley said during her appearance on Sirius XM’s Barstool Radio. Elaborating further on her preferences, she continued, "Everyone I think can agree that from ancient times d**ks make wonderful sculptures. Other than that, I’m not as interested." Adding how she sees certain parts of men as showpieces, the singer said,  “I love the shape, I think it looks really good on a table.”

Miley even agreed that she's more dominating as a partner. “I felt like the women I ended up being around, the role fit easier for me, because even in my relationship with men, a lot of the times, I kind of hold a more dominant space," she said. Miley's recent split with Cody Simpson was rather shocking for her fans as the duo looked like they were really in love. Miley Cyrus Opens Up About Coping Up With Her Divorce From Liam Hemsworth.

Miley being the upfront girl that she is didn't hesitate from putting across her views and that's what makes her so special.

(The above story first appeared on LatestLY on Jan 19, 2021 09:11 PM IST. For more news and updates on politics, world, sports, entertainment and lifestyle, log on to our website latestly.com).