Olivia de Havilland, Gone With The Wind Star, Dies At 104

Olivia had earned an Oscar nomination for her role as Melanie in Gone With the Wind. She famously also starred in Captain Blood, The Adventures of Robin Hood, The Private Lives of Elizabeth and Essex among others. 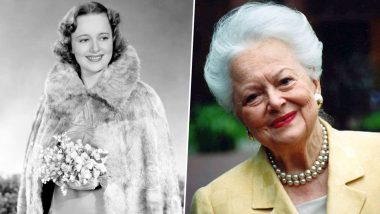 Gone With the Wind actress Olivia de Havilland passed away aged 104 on Sunday, July 26. The two-time Academy Award-winning actress was the last surviving cast member of the iconic film. Havilland died peacefully from natural causes at her residence in Paris, France, confirmed reports. Olivia had earned an Oscar nomination for her role as Melanie in Gone With the Wind. She famously also starred in Captain Blood, The Adventures of Robin Hood,The Private Lives of Elizabeth and Essex among others. Gone With The Wind Returns to HBO Max with a Disclaimer That Says It ‘Denies the Horrors of Slavery’.

De Havilland also worked in Television and also earned a Golden Globe for her performance in the TV movie Anastasia: The Mystery of Anna. On the personal front, De Havilland married journalist Marcus Goodrich in 1946 with whom she also welcomed a son, Benjamin Goodrich. The couple divorced in 1953. HBO Max Temporarily Drops the 1939 Classic Gone With The Wind Over Its Depiction of Slavery.

Olivia earned several major Hollywood honours for her career in movies. She received a star on the Hollywood Walk of Fame and the National Medal of Art, which she was presented in 2008. Havilland was also presented with a Legion of Honor from France in 2010. The veteran actress was loved by many for her endearing performance and will be dearly missed as they cherish the work she has left behind. Our condolences to the actress' family, may, Oliva Havilland rest in peace.

(The above story first appeared on LatestLY on Jul 26, 2020 09:52 PM IST. For more news and updates on politics, world, sports, entertainment and lifestyle, log on to our website latestly.com).