Priyanka Chopra Jonas is currently in London for the shooting of her upcoming project titled Text For You. The country has issued strict lockdown rules in wake of the new COVID-19 strain. 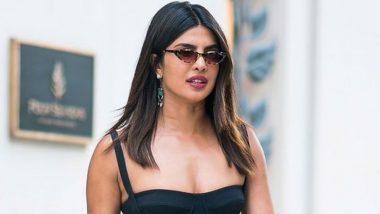 Priyanka Chopra Jonas is currently in London for the shooting of her upcoming project titled Text For You. The country has issued strict lockdown rules in wake of the new COVID-19 strain. The global icon was reportedly caught violating rules in London and photographs of the same has reportedly been revealed by The Daily Newspaper. She was spotted entering a hair salon in Notting Hill district on Wednesday evening. Boris Johnson, UK PM Reimposes Harsh Lockdown in England Amid Surge in COVID-19 New Variant.

Owing to the rising number of cases in the country, all salons and beauty centres have to remain shut under tier-5 coronavirus restrictions . Priyanka Chopra Jonas was seen at the salon owned by the celebrity hairstylist Josh Wood. She was seen entering the venue along with her mother Madhu Chopra, an assistant and her pet dog. Half an hour later, the police officials were seen arriving at the venue to ask the customers to leave the spot. Priyanka Chopra Jonas And ‘Text For You’ Team Stranded In The UK Due To Tier 4 Lockdown.

A spokesperson for the Metropolitan Police was quoted as saying, “Police were alerted at around 17:40hrs on Wednesday, January 6 to reports of a COVID breach taking place within a hairdressers on Lansdowne Mews, Notting Hill. Officers attended and the owner of the salon was given a verbal reminder of the important need to comply with all regulations regarding COVID-19 and signposted to other sources of advice. No fixed penalty notices were issued.” It is reported that the salon was opened only for private appointments and Priyanka Chopra Jonas stated that she paid a visit to colour her hair for a movie and hence, she was not fined by the police officials.

(The above story first appeared on LatestLY on Jan 08, 2021 12:23 PM IST. For more news and updates on politics, world, sports, entertainment and lifestyle, log on to our website latestly.com).