Zack Snyder seems all set for his next feature film as The Hollywood Reporter just broke the news today that he will be writing and directing the sci-fi epic Rebel Moon at Netflix. 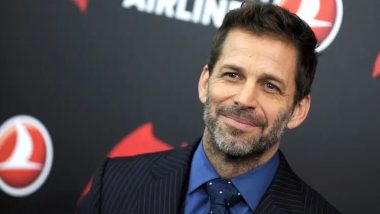 Zack Snyder seems all set for his next feature film as The Hollywood Reporter just broke the news today that he will be writing and directing the sci-fi epic Rebel Moon at Netflix. This development comes a month and a half after his last release Army of the Dead, and showcases that Snyder now has a great working relationship with Netflix. For Rebel Moon. Snyder will be joined by his Army of the Dead  co-writer Shay Hatten and his co-writer on 300, Kurt Johnstad. Army of the Dead: 7 Best Deaths in Zack Snyder’s New Zombie Film on Netflix (LatestLY Exclusive).

According to The Hollywood Reporter ,“The story is set in motion when a peaceful colony on the edge of the galaxy is threatened by the armies of a tyrannical regent named Belisarius. Desperate people dispatch a young woman with a mysterious past to seek out warriors from neighboring planets to help them make a stand.” Does this sound familiar? Well that’s because this is going to be heavily inspired by George Lucas’ epic, Star Wars. Zack Snyder Joins Hands With Huma Qureshi To Help Delhi Fight COVID-19 Pandemic With a Pledge ‘A Breath of Life’.

A decade before Snyder made this deal official with Netflix, he had approached Lucasfilms with a Star Wars moviethat would be heavily inspired by the works of the late Akira Kurosawa. Akira Kurosawa is an acclaimed Japanese film maker who was renowned for making some of the most influential samurai films. Snyder's project was meant to be more darker and mature than how George Lucas envisioned it to be.

The main idea behind it was that Snyder wanted to play around in the Star Wars universe with his own characters. But after the Disney acquisition it just remained as a pitch and nothing else. Snyder would then go on to rework on the script and make its own original thing, hence Rebel Moon was born. Snyder even considered making it a series but felt that a feature film would do the story more justice.

Snyder states that “This is me growing up as an Akira Kurosawa fan, a Star Wars fan”, he later continued that “It’s my love of sci-fi and a giant adventure. My hope is that this also becomes a massive IP and a universe that can be built out.” Snyder hopes that production can start somewhere around early 2022 and also stated that he has spent the last two to three years just developing this story. Whatever the case maybe, it does look like that Rebel Moon is going to be another hit for Netflix given how successful Snyder’s last outing was with them. Rebel Moon currently has no release date, but it will be streaming on Netflix from day one.

(The above story first appeared on LatestLY on Jul 07, 2021 07:00 PM IST. For more news and updates on politics, world, sports, entertainment and lifestyle, log on to our website latestly.com).