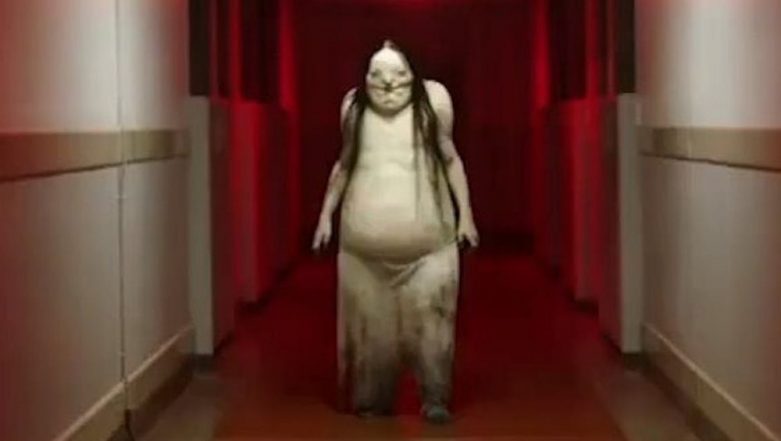 We know that Stella’s mom left her family when she was a baby, something she blames herself for. Between brooding and taking care of her dad – who is equally troubled by his wife’s absence – Stella loves escaping into the world of horror. She is obsessed with ghosts, ghouls and goblins, and we learn she’s somewhat of a budding horror fiction writer herself.

She hangs out with her friends – the potty-mouthed Chuck and the eloquent and nerdy Auggie. One Halloween night, while escaping from a bunch of high school jocks, the trio runs into a mysterious and handsome stranger (Garza). The four break into an abandoned mansion once owned by the wealthy Bellows family. Stella brings her new friend up to speed with the myth of Sarah Bellows, the youngest member of the family who was accused of killing children in the town. 'Scary Stories to Tell in the Dark' Director André Øvredal: ‘Guillermo Is a Master Storyteller That I’ve Learned So Much From.’

Stella’s obsession with Sarah goes beyond her fascination with the paranormal. In her, she sees a kindred spirit – an outcast with a flair for writing scary stories. In the decrepit room that belonged to Sarah, Stella finds a book of horror stories written by the young Bellows girl. Stella thinks it appropriate to take the book with her.

There’s one small problem though. The spirit of Sarah is not too pleased with Stella and the boys breaking into the house and making off with her book. Bad things soon start happening in the sleepy town of Mill Valley, and kids start disappearing again. It doesn’t take too long for Stella to discover that the book she stole writes fresh scary stories with a horrific chapter (and a horrific fate) waiting for each of her friends.

The book, like Pennywise from It, goes after the children by exploiting their personal fears and writing down their stories in real-time. A homicidal scarecrow comes to life in "Harold," a zombie hunts for her lost toe in "The Big Toe", spiders burst out of a girl's face in "The Red Spot", a pale lady haunts a hospital corridor in "The dream" and a jangly man hunts down the friends in "Me Tie Dough-Ty Walker.” How Stella stops the book from writing new stories and killing her friends is what the movie is all about.

Watch Trailer of Scary Stories to Tell in the Dark:

The film does a good job trying to cater to its diverse audience – everyone from adolescents to adults – without making the adults go, “Yeesh! Is this what kids watch in the name of horror these days?” Despite being bogged down by predictable horror movie clichés like the haunted house and the vengeful ghost, Stories to Tell in the Dark manages to keep it fresh and engaging.

Guillermo del Toro’s menagerie of monsters needs a special mention. From Harold to the creepy woman at the hospital, each creature can revive some of your deepest, darkest fears from childhood.

But it does fall prey to the most annoying horror movie scare tactic – jump scares. Long intervals of pin-drop silence followed by sudden shrieking and howling make you wonder whether the film would have been just as scary without them.

The film is entirely told from Stella’s perspective and Colletti shines as the brooding, freckled redhead with demons of her own. Garza as the swarthy Ramon, draft evader and the love interest of Stella is equally impressive.  Zajur and Rush hold their own as the token goofy guy and nerd in the group.

- The promise of a sequel

Stories to Tell in the Dark is a nostalgic look at some of our worst childhood nightmares and it makes us relive them. The film also touches upon topics of abuse, trauma and healing. It is equal parts entertaining and scary despite some cliches. If you are a sucker for good old fashioned gothic horror, complete with a haunted house, creaky footboards, wailing ghosts and family secrets,   Guillermo del Torro and André Øvredal’s latest fare is a great choice.