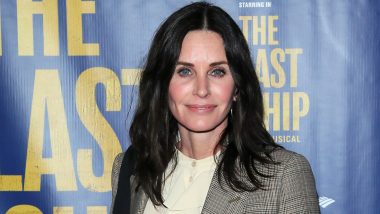 While Deadline had earlier announced Courteney Cox's return to Scream's upcoming sequel, the actress has confirmed the breaking news via her Instagram account. The Friends actress will reprise her role News Reporter Gale Weathers. Besides Cox, David Arquette will also return as Dewey Riley. The film will be directed by Matt Bettinelli-Olpin and Tyler Gillett while its screenplay will be penned by James Vanderbilt and Guy Busick. Cox earlier took to her social media account to confirm her next outing and the announcement was enough to send her fans in a tizzy. Friends Stars Lisa Kudrow, Courteney Cox, David Schwimmer and Matt LeBlanc Thank Fans While Celebrating the Show's 25th Anniversary.

“We can’t imagine Scream without the iconic Gale Weathers and are so incredibly thrilled and humbled to have the opportunity to work with Courteney. We’re absolute mega fans of her work and we’re so excited to join her in the next chapter of the Scream saga!" said Radio Silence in their interaction with Deadline.

Check Out Her Announcement

Earlier actress Neve Campbell had dropped some major hints about the film's upcoming sequel while revealing how the talks for the same have already been started. "The conversations are being had, that's for sure. There was a lot of talk about it. I wasn't sure it was going to happen and I was approached six weeks ago, but the timing's not great right now, obviously," she had said in one of her earlier interactions.

(The above story first appeared on LatestLY on Aug 01, 2020 12:00 AM IST. For more news and updates on politics, world, sports, entertainment and lifestyle, log on to our website latestly.com).