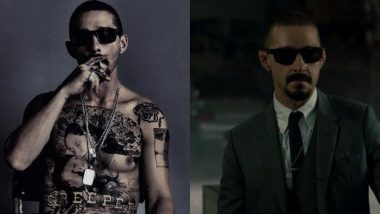 Shia LaBeouf had earned a bad reputation for getting too deep into the characters that he is playing on the screen. The actor was drunk on moonshine to get into his character for a film about the probation era and misbehaved on the sets. For Fury, he got his tooth pulled out by his dentist and he even got himself enlisted. While in an interview he had said that he hated method acting, a new example of his style has come up. Turns out, for his next film, The Tax Collector, Shia LaBeouf got his whole chest tattooed. The Tax Collector Trailer: Shia LaBeouf and Bobby Soto Headline David Ayer's Crime Drama (Watch Video).

The revelation was made by the film's director David Ayer. He told  /Film, "He’s one of the best actors I’ve worked with, and he’s the most committed to body and soul. He had a tooth pulled on Fury, and then on Tax Collector, he got his whole chest tattooed. So he kind of goes all in, and I’ve never known anyone that committed." Let Us Talk About The Actor's Method To Madness.

Check Out The Trailer For The Tax Collector Here:

The tattoos were first spotted by the media when Shia did a bare-chested body workout in public. He flaunted his tats which were the word 'creeper' (his name in the film) and a depiction of Madonna holding a clown.

Other real-life stunts by the actor for his movies include consuming hallucinogenic drugs for The Necessary Death of Charlie Countryman and sending nude pictures for audition of Nymphomaniac.

(The above story first appeared on LatestLY on Jul 04, 2020 09:00 PM IST. For more news and updates on politics, world, sports, entertainment and lifestyle, log on to our website latestly.com).