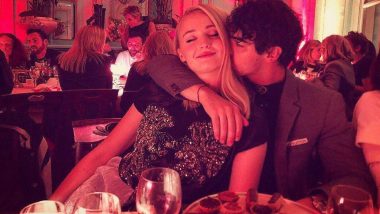 Sophie Turner and Joe Jonas had a wedding that surprised the world. Even their family members. The couple did not make a big deal about it. The private couple has done it again. As per reports, Sophie has given birth to their daughter on July 22. Neither the Game of Thrones actress, nor Joe has shared the news on social media. Sophie, 24, gave birth to her daughter at a hospital in Los Angeles on Wednesday. Congratulations. Priyanka Chopra is Excited About Sophie Turner's Pregnancy, Has Been Constantly Checking on Her Through FaceTime.

While there is no official confirmation about it, as per a report by dailymail.co.uk, the couple has named their daughter Willa. The name is of German origin and means, "resolute protection". We will eagerly wait for the couple to share the pictures of the baby. Sophie Turner's Cutesy Pink Summer Dress Is a New Addition to her Stylish Maternity Wardrobe (View Pics).

Sophie and Joe, 30, started dating in the year 2016. They became Instagram officials in January 2017. In October 2017, Sophie confirmed that they are engaged to be married. "Not like I achieved anything, but I found my person, like I'd find a house that I love and want to stay in forever. There's a sense of peace that comes with finding your person," she said. After attending the Billboard Music Awards, the couple got married in Las Vegas on May 1, 2019. They had a second wedding, more customary, on the following June 29 in France.

Sophie was clicked many times by the paparazzi flaunting her baby bump. She took walks with her husband Joe on multiple occasions.

(The above story first appeared on LatestLY on Jul 28, 2020 12:17 AM IST. For more news and updates on politics, world, sports, entertainment and lifestyle, log on to our website latestly.com).