India’s First Ever Grammy Winner Vikku Vinayakram Calls His ‘Ghatam’ As His Breath, Life and Soul 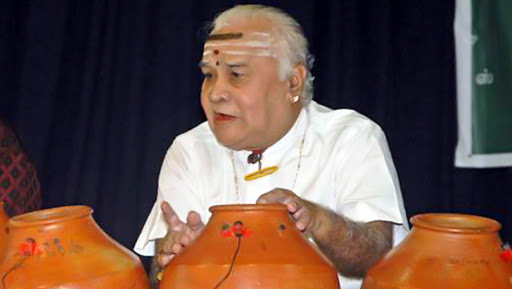 New Delhi: Padma Bhushan recipient musician Vikku Vinayakram is credited for putting the Carnatic music instrument of 'Ghatam' (an earthen pot) on the world map by playing it for a Grammy-winning music album. Still playing the instrument with the same energy as ever, he feels the 'Ghatam' is his alternate soul. "Without the 'Ghatam,' I am nothing. It's my breath, my life, my soul. Playing it is a ritual for me. I see God through my 'Ghatam'. It's part of my prayer through which I meditate," the award-winning percussionist told IANS. Grammy Awards 2019: Beck Takes Home Best Alternative Music Album for Colors

Born in 1942, Vinayakram has collaborated with tabla maestro Zakir Hussain and leading Carnatic vocalists such as M.K. Thyagaraja Bagavathar, G.N. Balasubramaniam and M.S. Subbulakshmi. He played alongside Hussain for Mickey Hart's music album "Planet Drum" which won the Grammy in 1991. Even at 77, with his third generation into music, the exponent feels each concert has something to teach. "We are all part of the same family. Each concert is a learning and there is a lot to learn from each other. That's how we mature over a period of time through the music we share," he said about his collaborations. Grammy Awards 2019 Full Winners’ List: Lady Gaga, Bradley Cooper, Pharrell Williams and More; Names of Artists and Albums That Won The Music Honours

Asked how the youth can be roped in as listeners and patrons of classical music, Vinayakram pointed to more concerts and outreach through radio. "Radio channels play a big role for the Indian population but there are few public radio broadcasters that play classical music. This needs to increase and music should be taught as a curriculum from young age," said the Sangeet Natak Akademi fellow. Looking back at an illustrious career in music that started at age 13, he observed: "We used to have long hours of practice and performances that has changed a bit".

The music maestro added that everything is an evolution and "you have to adapt along else you will become obsolete". Vinayakram is set to put together a unique Carnatic percussion act '3G' at an HCL concert, with his son V. Selvaganesh and grandson Swaminathan on Friday. Renowned Bharatanatyam artiste and actor Shobana's dance performance is also scheduled at the event.