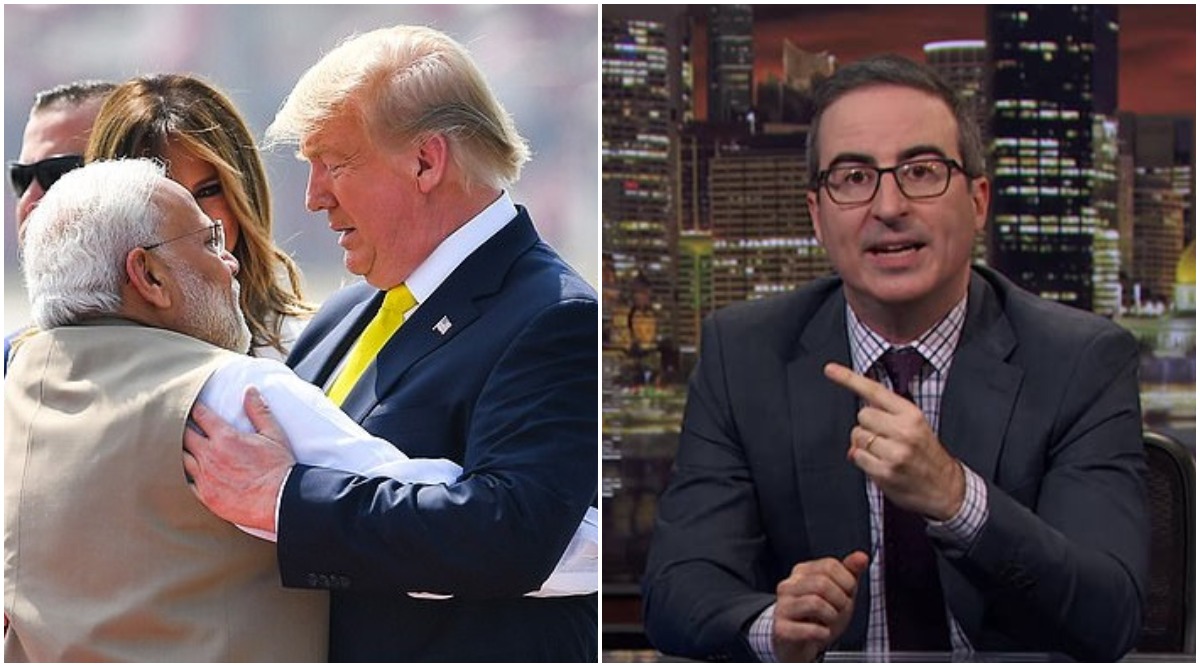 The President of the United States of India, Donald Trump, had made a special visit to India on the invitation of the Indian Prime Minister Narendra Modi on February 24, 2020. The event called 'Namaste Trump' was kickstarted in a grand way in Ahmedabad in the newly inaugurated Motera stadium. While the event was hailed by the supporters of both Trump and Modi, it hasn't gone down well with the critics of both the world leaders. Namaste Trump: Donald Trump Heaps Praises on PM Narendra Modi at Motera Stadium Event, Says 'He Worked as a Tea Seller, Now He's a Champion of India'.

On the eve of Trump visit in India, popular comedian and talk show host, John Oliver, released a new episode of his show Last Week Tonight. The episode was especially targeting at Trump's visit of India, making fun of him and his wife, Melania Trump, visiting Taj Mahal - the symbol of love- when they never look like a loving couple anyway. Oliver also spoke about how Trump called Modi as the 'Father of the Nation', which he is says is not at all right because a certain Mr Gandhi holds that title rightfully. John Oliver Confirms Beyonce Was Photoshopped in 'The Lion King' Cast Picture.

From Trump, Oliver goes on to take on the Indian Prime Minister - the episode was actually a Modi special. Oliver admitted Modi's popularity among the masses and his work on Swachh Bharat Abhiyaan and giving LPG subsidies. But he also took potshots of Modi and his various controversial decisions like Demonetisation, appointing Yogi Adityanath as the Chief Minister of Uttar Pradesh, and the decision to implement the Citizenship Amendment Act. While talking about CAA, Oliver also showed the video of Home Minister Amit Shah talking about NRC and NPR and comparing immigrants to 'termites'. The episode also covers the the ongoing anti-CAA and NRC protests. Towards the end, Oliver delivers the biggest slamdunk on the Indian PM by saying, "India, which is home to the enduring symbol of love (Taj Mahal) frankly deserves a lot more than this temporary symbol of hate."

The episode has found itself its fair share of both admirers and detractors, but obviously. Check out the tweets below, praising the episode:

STILL a few B&D anchors & actors past their prime who dont understand why people are risking their lives for past 2 months to oppose #CAA_NRC_NPR@iamjohnoliver explains CAA - as if to a 5yr old - and why you cannot separate it from the proposed NRC.https://t.co/RijEtC6sN1 pic.twitter.com/5XT27pmu3X

Do yourself a favor. Turn off your TV sets. And watch John Oliver.

"India, home of this enduring symbol of love (Taj Mahal) deserves a lot more than this temporary symbol of hate (Modi)."https://t.co/9mhTHAeute

"The RSS is inspired from Nazi Ideology and Hitler."

This episode from @iamjohnoliver about Modi, RSS and CAA is lit. Finally the Western Media has understood that BJP and RSS are Neo-Nazis. pic.twitter.com/h4YVE8fJNn

"India, home of this enduring symbol of love ((Taj Mahal), frankly deserves a lot more than this temporary symbol of hate (Narendra Modi)"-

This is what John Oliver had to say in his latest episode of #LastWeekTonight, which focused on Modi and his dangerous politics. pic.twitter.com/R8Ju6ru4Kc

And there are those who think John Oliver didn't get the intricacies of Modi's work in India, that he didn't understand how CAA works and slammed the host for this.

Hey @iamjohnoliver u should consider firing some of your researchers on @LastWeekTonight because they got so many basic facts wrong on that Modi piece. For one it's not the CAB anymore... Its the CAA because the Bill was passed in Parliament with cross party support

Just see the Damage they are doing peacefully.

Hey @iamjohnoliver thanks for the Modi video

Much appreciated,Behold your fighters for Democratic values..

@iamjohnoliver unfortunately as much as i love your show there were several factual inaccuracies in this. The NRC has not even been introduced in parliament yet and CAA targets minority communities from Pakistan, Bangladesh and Afghanistan. It is not for any Indian citizen....1

With John Oliver dropping the video on Modi the same day as #NamasteyTrump, and strategically planned mob violence, we will soon see international hit pieces on India, it seems like a international nexus, the game being played is much bigger.

Our next question here is - when will #BoycottJohnOliver or #BoycottLastWeekTonight or #JohnOliverAntiNational begin to trend on Twitter.