The hottie from the sunny land of California spoke exclusively with LatestLY to talk about her experience of watching Bollywood movies and the mighty stars she met on her visit to the island city. 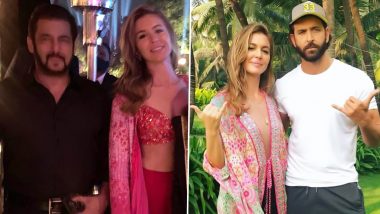 Actor Samantha Lockwood of Shoot The Hero and Hawaii Five-0 fame is in the city. On a rather cloudy day in Mumbai the Californian beauty chatted exclusively with LatestLY to discuss her love for Bollywood films, the legendary actors she met in the island city in the recent past, and how yoga continues to ac as her constant life survivor.  The 39-year old actor refused to talk about any project that she might be a part of but promised that she will be shuttling a lot between Los Angeles and aamchi Mumbai.

"Nice looking man, charming, kind and all the above...Hrithik Roshan is very easy to talk to. He is a fantastic conversationalist. He comes from a film family like I do so we had a lot of common factors we could talk about and discuss at length.  Hrithik Roshan is one of those rare stars from Bollywood who have actually been to Hawaii and love the place where I have spent a significant part of my life. There are certain ideas I had in mind for him and about the project that may or may not happen but it was really nice meeting the Greek God," recounted Samantha. Vikram Vedha: Hrithik Roshan Or Vijay Sethupathi, Whose Gangster Look Is More Impressive? (VOTE NOW)

Bollywood's ace designer Manish Malhotra surprised Samantha a great deal with his looks as indeed with his style. "Manish is so cool and dapper., I didn't expect him to be so impressively good-looking. But in reality, he truly is. It was a brief encounter with him as he had designed an outfit that I was wearing for an event. So I walked up to him to say thank you for creating such beautiful creation. He is very very talented," maintained the actress. It’s Official! Bigg Boss 15 Extended for Two Weeks, Announces Host Salman Khan (Watch Video)

Samantha says her interaction with Salman Khan has been memorable too as she stresses that Salman is a nice guy. " Salman is very friendly and very nice. He makes Blockbuster Bollywood Hindi movies, So I am still figuring out if it would be difficult to be a part of his project. So there's nothing concrete as of now I can talk about as that would be very soon to talk about be it me considering film offers or working in OTT projects." signed off the hottie.

(The above story first appeared on LatestLY on Jan 11, 2022 06:03 PM IST. For more news and updates on politics, world, sports, entertainment and lifestyle, log on to our website latestly.com).