Helmed by Jeethu Joseph, Mohanlal, Unni Mukundan and Anu Sithara-starrer 12th Man was released on Disney+ Hotstar on May 20. Having said that, sadly the film is the latest victim of piracy, as it has been leaked online for free watch and download. 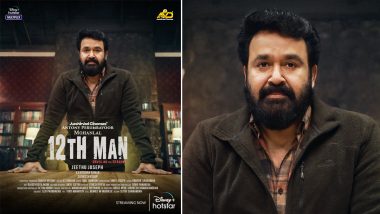 Mohanlal, Unni Mukundan and Anu Sithara-starrer 12th Man was released on Disney+ Hotstar on May 20. Helmed by Jeethu Joseph, the synopsis of the movie reads, "Eleven friends get together for a bachelor party, but the celebrations go awry because of a phone call and a death. A drunk cop steps in to unravel the mystery." Having said that, as per the reviews, the mystery-thriller flick has garnered positive reactions from the critics and netizens. However, unfortunately, within a few hours after its release on the OTT platform, 12th Man got leaked online. The movie is now available for streaming on torrent sites. There's an HD print available of the film to watch online. 12th Man Movie Review: Mohanlal Turns Desi Hercule Poirot in Jeethu Joseph's Twisty Murder-Mystery That Keeps You Guessing Till the End.

However, this is not the first time, a film has been leaked and surfaced online for download and free watch. Unfortunately, every movie falls prey to this chaos. In the past, many strict actions were taken against these pirated sites, but even after getting blocked, the websites bounce back promoting piracy. This needs severe action by the cyber cell. This really needs to be stopped with hard steps in future. 12th Man Teaser: Mohanlal’s Malayalam Thriller by Jeethu Joseph About Three Phases of Life Looks Mind-Blowing (Watch Video).

(The above story first appeared on LatestLY on May 20, 2022 12:43 PM IST. For more news and updates on politics, world, sports, entertainment and lifestyle, log on to our website latestly.com).