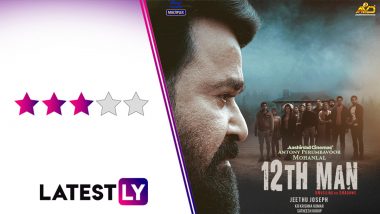 12th Man Movie Review: Jeethu Joseph-Mohanlal combo gave Indian cinema two of its best thrillers in Drishyam and its sequel. So can you blame us if we are left excited when the director and the superstar are uniting once again, this time for a murder mystery? 12th Man, likes Drishyam 2, arrives on Disney+ Hotstar and it made me wonder who makes release strategies in Mohanlal's team. Who can explain why his bad movies like Marakkar and Aarattu had theatrical releases, while his (comparatively) better movies are coming out on OTT. Add 12th Man to that list! 12th Man Movie: Review, Cast, Plot, Trailer, Streaming Date – All You Need To Know About Mohanlal’s Malayalam Film.

12th Man, unlike Joseph's Drishyam films or even Memories, isn't as tightly knit but nevertheless, it is an engaging watch that keeps you guessing till the very end. Well, isn't that what makes a murder mystery tick, right? 12th Man revolves around 10 friends that consist of four couples and two singles. Six of them are college mates, and they made sure their partners are also friends with each other. Their friendship is apparently so deep, that they they stay in the same locality and have a WhatsApp group where they discuss everything.

So we have Zacharia (Unni Mukundan) and Annie (Priyanka Nair), who are having job stability issues and are also expecting. Then, Mathew (Saiju Kurup) and Shiny (Anusree), the latter coming across as a bossy and suspicious woman. There is also Jithesh (Chandhunath) and Dr Nayana (Sshivada), a gynaecologist, and Sam (Rahul Madhav), a bank manager, and Merin (Anu Sithara), a housewife. Fida (Leona Lishoy) is one of the singles in the group - a divorcee who is closer to Mathew than to others, and has invested in his failing business. Sidharth (Anu Mohan) - the other single - has recently got engaged to Aarathy (Aditi Ravi).

So to celebrate his engagement, these friends go to a luxury resort in Idukki, with Aarathy also joining them. In the night, when someone claims that there is no secrets in the group, Fida and Nayana disagree. They propose that the friends play a game where they keep their phones on the dining table for next hour and attend all calls on speaker for others to hear, as well as read out all WA messages they get. While the game starts on a fun note, soon some dark secrets tumble out, and the friends have a fight. Things get even more intriguing when one of them is found dead later in the night.

So what is Mohanlal - the titular 12th Man - doing here? Mohanlal plays Chandrashekhar, a drunk guest at the resort who keeps bothering these friends in the beginning when they reach there. I really didn't like these portions much. Mohanlal's performance, where he tried to hark back to his drunk acts in Adhipan and Ayal Kadha Ezhuthukayanu, struggles to bring the same naturality seen in those movies. It also doesn't help that he is shown acting creepy towards women.

Do all these matter to the plot ahead like Mohanlal did in Bhramaram? No. This whole sequence could have been trimmed or even avoided.

Even without those drunken portions, the first forty minutes of the 12th Man is somewhat of a drag in trying to establish the basic characteristics of these friends, though it is a difficult to track who does what.

12th Man starts getting better when Mohanlal's character gets temporarily out of the picture, and the friends start the game. While providing some recognisable voice cameos from other popular stars, the 'revelations' do feel artificial at times, as though the truth bombs are dropped just so that the plot can finally go ahead. Still the sequence brings the movie back to the track.  Once the death is discovered, I was completely reeled in. Drishyam 2 Movie Review: Mohanlal’s Sequel to His Blockbuster Family Thriller Is Loaded With Pulpy Surprises.

Interestingly, the dinner table game is inspired from the 2018 Korean drama Intimate Strangers, which itself is inspired by the 2016 Italian movie Perfect Strangers. However, how Jeethu Joseph spins this 'inspiration' to his favour is the movie's actual winning move.

Another sign that 12th Man is getting better hereon, is the reemergence of Mohanlal's character, now more sober and turning into an investigator. As the desi Hercule Poirot, this Mohanlal is much more bearable and easily commands the whole room, and the movie hereon, and the superstar does a fab job at that.

The whole interrogation sequence, set in one room and across a few hours, keeps you guessing about who did it and why. More than finding the killer, what Chandrashekar does is go to its Korean inspiration and get layers peeled off these friends' so-called camaraderie and thereby spilling out darker secrets by continuing the game, and once that's done, find out who the killer is among them. Not an easy task, when everyone has secrets to hide, and some are protecting others. Aaraattu Movie Review: Mohanlal’s Latest ‘Entertainer’ Is an Terrible Cacophony of the Good, the Bad and the Ugly of Superstar’s Past Films.

With limited red herrings, it is a difficult task to not let the audience guess who the murderer is, so Jeethu Joseph keeps shuffling the pointer from one person to another, while not ignoring the possibility of an accident and suicide, just so that the viewer doesn't settle in about the suspect. Which is a nice strategy, as the reveal turns out to be unexpected (at least for me). In fact the portions are so gripping that you fail to notice that Antony Perumbavoor has not made his perfunctory cameo.

The performances of most of the cast help in the case, with the women, especially Priyanka, Sshivada, Anu Sithara, Anusree and Leona Lishoy, faring better than the men.

While this entire sequence elevate 12th Man to quite a decent mystery thriller, there are some drawbacks that I can't help but ignore. I am not sure if I am a fan of the idea to reveal that the dead victim was suffering from bipolar disorder. The depiction of mental illness is always a sensitive subject, and is something that needs to be handled carefully. I get it that the idea is to give some sympathy to the person's past actions, but as the movie proceeds ahead, it gets harder to do that. Though I like that at one point even 12th Man acknowledges this difficulty, when Chandrashekar, in one of his angry bursts, asks why the victim would act so weird unless he/she is mad, and then he pauses to reflect on the room as to what he just said.

Another drawback is the movie's length. Even if you ignore the slow-paced first act and concentrate on the single-room setup, the pace keeps struggling to match up the suspense. A movie like 12th Man shouldn't be 163 minutes long.

- The Guessing Game is Quite Good

12th Man may not be in the same league as Drishyam 1 & 2, but its Agatha Christie-meets-Intimate Strangers setup provides a watchable and engrossing murder mystery, when not battling the awkward editing. Also a point in its favour that it is easily most bearable of Mohanlal's recent films post Drishyam 2. 12th Man is streaming on Disney+ Hotstar.

(The above story first appeared on LatestLY on May 20, 2022 12:33 PM IST. For more news and updates on politics, world, sports, entertainment and lifestyle, log on to our website latestly.com).