The recent Acharya, featuring megastar Chiranjeevi and his son Ram Charan, turned out to be a box office disaster. 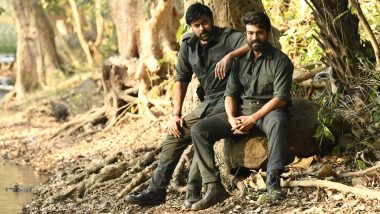 The recent Acharya, featuring megastar Chiranjeevi and his son Ram Charan, turned out to be a box office disaster. Ram Charan is reportedly making up for the losses, as many investors who hoped for a blockbuster invested a lot of money and lost money. Acharya: Producers of Chiranjeevi, Ram Charan’s Film Go for Early OTT Release To Make Up for Theatrical Losses.

Furthermore, with Koratala Siva on board, the investors did not expect the film to be such a disaster. The news that Ram Charan is planning to compensate a portion of the film's losses has sparked hope among buyers and distributors, who have suffered huge losses. Chiranjeevi, on the other hand, will be seen in 'Godfather', 'Bholaa Shankar', and a couple of other movies.

(The above story first appeared on LatestLY on May 12, 2022 01:35 PM IST. For more news and updates on politics, world, sports, entertainment and lifestyle, log on to our website latestly.com).