Allu Arjun Birthday: 4 Films of Bunny That Should Not Be Missed, Watch The Full Movies Here!

Superstar of Telugu cinema, Allu Arjun, turns 36 today! Let's take a look at his blockbuster films that one shouldn't miss to watch. 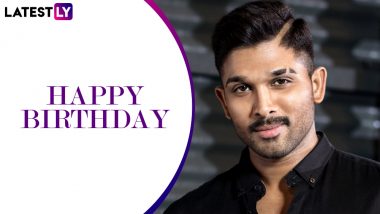 This day is special not just to Allu Arjun but even to all of his fans, after all this dashing actor has turned a year older today (April 8). Allu Arjun celebrates his 36th birthday and we want to thank him for entertaining us all, through his amazing dance forms and films, of course. Allu Arjun is also referred as Bunny by his fans, and many might even know how he got that name. Born on April 8, 1983, to film producer Allu Aravind and Nirmala, Bunny is one of the most-sought after actors in the Tollywood industry. He made his debut in Telugu cinema when he was child and then 16 years later, he made a cameo appearance in Daddy. But things changed after he did a film with director Sukumar. So on this special day, let’s take a look at those four hit films of Allu Arjun which were not just a huge hit but also changed his life. And in case if you haven’t watched any of these, you must watch it. It Was a Fam-Jam for Tollywood Star Allu Arjun on Holi 2019! These Pics Are Proof.

The romantic action Aarya released in 2004 brought Allu Arjun and director Sukumar together and ever since then they are known as the magical pair of Tollywood. The film was remade in numerous Indian languages and it is now said that the duo have joined hands again for another mega project. In this blockbuster film Allu Arjun played the role of a slipshod brat. Superhit Duo Allu Arjun and Sukumar to Collaborate After Nine Years, Third Project After Arya 2.

Allu Arjun was seen in Bunny which hit the theatres in 2005. He played the titular role who was also called as Raja. And it is through this film he got the name Bunny. The film which had lot of action and drama, was a mass entertainer and the results of it were seen at the box office. Directed by V.V. Vinayak, the film was dubbed in Oriya, Hindi and Malayalam.

Produced by Allu Aravind (the actor’s father), Happy also starred Bollywood actors Genelia D’Souza and Manoj Bajpayee in the lead. The Telugu film released in 2006 turned out to be an average hit at the ticket windows but the Malayalam version shined through. If you see Allu Arjun’s avatar back then in this film and now, you’ll be surprised to see the drastic change in his style.

Desamuduru released in 2007 has been one of the biggest hits in Allu Arjun’s career. The film that had Hansika Motwani paired opposite the actor, Rambha featured in an item song, was the highest grossing film of that year. The actor underwent a transformation to get into the skin of his character, Govind. Wink Girl Priya Varrier Has a Fangirl Moment With Superstar Allu Arjun (Watch Video).

These are the four films which you really got to watch, if possible this week itself. There are few celebs who are die-hard fans of Allu Arjun and the one who recently admitted about it is none other than Siddhant Chaturvedi. Yes, he’s the one who shot to fame with Gully Boy. Well, even Siddhant who couldn’t stop praising about his favourite actor, might also end up watching some of Allu Arjun’s films. Which one are you planning to watch? We wish Allu Arjun a very happy birthday and a great year ahead!

(The above story first appeared on LatestLY on Apr 08, 2019 09:15 AM IST. For more news and updates on politics, world, sports, entertainment and lifestyle, log on to our website latestly.com).