The speculations of Allu Arjun and Sukumar coming together for a film has been going on for a long-long time. 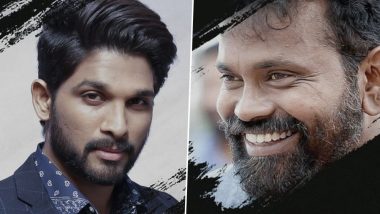 Allu Arjun and filmmaker Sukumar are known to be the superhit combo down south. They worked for two Telugu-language films in the past – Arya and Arya 2. Both the films performed brilliantly at the ticket windows. Now after nine years, Allu Arjun and Sukumar would be collaborating for the third time for the film which is yet-to-be-titled. Wink Girl Priya Varrier Has a Fangirl Moment With Superstar Allu Arjun (Watch Video).

The makers have announced about it on the special occasion of Maha Shivaratri 2019 (March 4, 2019) and fans just can’t contain their excitement. The untitled project will be produced by Maitri Movie Makers. The speculations of Allu Arjun and Sukumar coming together for a film has been going on for a long-long time. With this announcement, fans can rejoice and all the rumours can be put to rest. Mahesh Babu’s Maharshi to CLASH With Avengers Endgame.

Checkout the post which is doing rounds of social media:

The most lovable & path breaking duo is back,after #Arya series they are tie up for the 3rd time, Southern star @alluarjun creative dir @aryasukku happening prod house @MythriOfficial's film is on cards

There are not many details that have spilled about the upcoming project. Neither the film’s release date has been revealed as Allu Arjun is busy with his ongoing project. Sukumar has won the Filmfare Award for Best Director (Telugu) and Nandi Award for Best Screenplay Writer for his directorial debut, Arya. On the work front, Allu Arjun is busy with Trivikram Srinivas film. The last film Sukumar directed was Rangasthalam  and it was a blockbuster. Let’s wait and watch what this superhit duo have in store for us.

(The above story first appeared on LatestLY on Mar 04, 2019 06:34 PM IST. For more news and updates on politics, world, sports, entertainment and lifestyle, log on to our website latestly.com).