Babu Sivan Dies At 54: Director Of Thalapathy Vijay Starrer Vettaikaaran Passes Away Due to Kidney Failure 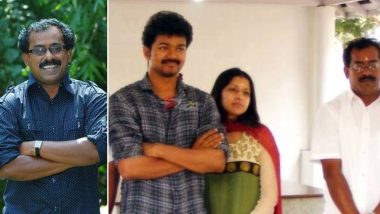 The Tamil industry has lost yet another of its dear fraternity members. Vijay's Vettaikaaran director Babu Sivan breathed his last on September 17, 2020 at the Rajiv Gandhi Government Hospital due to kidney failure. The news of Babu's death comes in barely days after the news of TV actor Vadivel Balaji, who succumbed to a heart attack and a paralytic attack. Vadivel Balaji Dies at 45, Comedian Suffered Cardiac Arrest.

As per a source in Times of India, "His two daughters had took up the NEET exam on Sunday, and his wife had gone along with them, leaving him alone in their house. On their return, they found him unconscious and rushed him to a hospital in Tambaram. But since that was a COVID-19 facility, he could not be admitted there and he was taken to another hospital, a private one, where he was treated." Telugu Actor Jaya Prakash Reddy Dies At 74.

As the family was facing financial constraints, they shifted Babu to the Rajiv Gandhi Government Hospital, where "doctors told them that he was having problems with his lungs, liver and kidneys. The director had not realised that he had such problems, and had on earlier occasions brushed them away as mild discomfort. A dialysis was suggested by the doctors as his kidneys were failing, and it happened this morning. But unfortunately, that did not help his recovery and he passed away while still in an unconscious state," revealed the source.

Despite having helmed a Vijay film, there wasn't much happening for Babu, who then shifted his focus to directing TV shows. He was currently directing Raasathi, a Tamil show for Sun TV. His other works include dialogue writing for Kuruvi and story discussion for Bairavaa. Our deepest condolences are with Sivan's family.

(The above story first appeared on LatestLY on Sep 17, 2020 01:14 PM IST. For more news and updates on politics, world, sports, entertainment and lifestyle, log on to our website latestly.com).