This festive season of Diwali has turned out to be rather shocking for Losliya and family. The former Bigg Boss contestant’s father Mariyanesan has reportedly passed away due to heart attack. 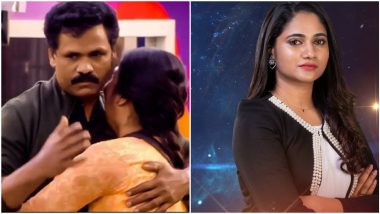 Losliya Mariyanesan was one of the top three finalists of Bigg Boss Tamil season 3, where she was declared as the second runner-up. Losliya, a popular contestant of the controversial reality TV show hosted by Kamal Haasan, was also one of the strongest participants and the viewers were impressed with her stint in the house. This festive season of Diwali has turned out to be rather shocking for Losliya and family. The former Bigg Boss contestant’s father Mariyanesan has reportedly passed away due to heart attack. Bigg Boss Tamil 3 Winner Mugen Rao: All You Need To Know About The Malaysian Singer.

According to leading media reports, Mariyanesan breathed his last on November 15, which was yesterday. Ever since the news of his demise has hit the internet, Losliya’s fans have been pouring condolences. Her father had come into limelight when he had entered Bigg Boss Tamil 3 during the Freeze Task; pictures from that particular task are going viral across social media platforms. Mariyanesan was working in Canada for almost a decade and it was an emotional moment for Losliya to see the former enter the house in such a surprising manner.

Condolences to family and friends.. May his soul RIP! pic.twitter.com/0ZF0ezo0Fl

Losliya Mariyanesan is a Sri Lankan news reader-turned-actress. She shot to fame after her stint in Bigg Boss Tamil season 3. She will be seen in the film titled Friendship in which Losliya will share screen space with Harbhajan Singh. We express our heartfelt condolences to Losliya Mariyanesan and all near and dear ones. May Mariyanesan’s soul rest in peace!

(The above story first appeared on LatestLY on Nov 16, 2020 10:51 AM IST. For more news and updates on politics, world, sports, entertainment and lifestyle, log on to our website latestly.com).