At the end of two sittings on either side of lunch, the court ruled that actor Dileep has to appear before the police probe team for three days starting Sunday for further questioning. 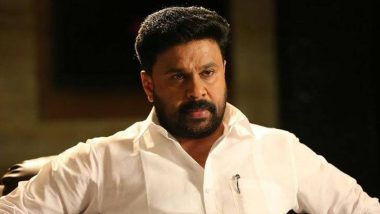 It was anxious moments for actor Dileep on Saturday when the Kerala High Court heard his anticipatory bail that was strongly opposed by the prosecution. At the end of two sittings on either side of lunch, the court ruled that actor Dileep has to appear before the police probe team for three days starting Sunday for further questioning. The court also ordered that the actor should not be arrested till January 27 and on that day the director general of prosecution should in a sealed cover handover the details of the three day questioning. Kerala High Court Asks Police to Probe Actor Dileep’s Complaint of Media Trial.

The court then posted the case for January 27. The court said Dileep should present himself before the Crime Branch police probe team from 9 a.m. till 8 p.m. and any attempt on his part to tamper or influence the case in any manner will result in his cancellation of the bail which he has now. The fresh twist in the actress abduction case in which Dileep is an accused came early this month after film director Balachandra Kumar made fresh statements related to the case, which included that Dileep and his close aides had conspired to even attack the police official who probed the actress abduction case and also Dileep soon after being released on bail saw the visuals which showed the beleaguered actress who was kidnapped being physically attacked by her tormentors, while she was abducted. Dileep’s House In Aluva Faces Police Raid After New Allegations Resurface Against Actor In Malayalam Actress Sexual Assault Case.

Until this time it was only the trial court which had seen this and by now Kumar who made this and more disclosures had testified before the police and also a magistrate. Based on these disclosures, the police probe team registered a fresh case and Dileep sensing that he might be arrested sought anticipatory bail. Kumar reacting to the day's court proceedings said in the forenoon session, the counsel of Dileep was taking dismissive position about what I had testified, but in the afternoon session there was a major change in their attitude.

"It must be noted that there was even a reference made by the court in the afternoon session which said after seeing the evidences there are disturbing things. That's what has turned out to be crucial in the orders of the court that has come," said Kumar. Incidentally on Friday when the anticipatory bail plea came up before the court, it asked both the sides on the plan to move the case to Saturday and it said since there is a need for a detailed hearing, even though Saturday is a holiday, a special sitting will be held and to this both the sides agreed.

Dileep was arrested in 2017 and lodged in prison in a case related to a gang sexually assaulting a frontline heroine of South Indian movies and filming the scenes. After two months in jail, he was released on bail.

(The above story first appeared on LatestLY on Jan 22, 2022 05:33 PM IST. For more news and updates on politics, world, sports, entertainment and lifestyle, log on to our website latestly.com).