The Malayalam movie Drishyam released in 2013, written and directed by Jeethu Joseph manged to gain immense popularity and was loved by the critics as well as audiences. It soon also got a Hindi remake which starred Ajay Devgn in lead. 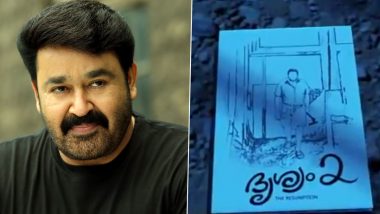 The announcement of Drishyam 2 took Twitterati by a storm as fans could hardly contain their excitement after hearing about Mohanlal teaming up with Jeethu Joseph again for a sequel to a suspense thriller. On May 21, which also happens to be superstar Mohanlal's birthday, a teaser has now been dropped by the makers. As a treat for the superstar's fans on his 60th birthday, this special surprise was dropped by the makers. The Malayalam movie Drishyam released in 2013, written and directed by Jeethu Joseph managed to gain immense popularity and was loved by the critics as well as audiences. It soon also got a Hindi remake which starred Ajay Devgn in lead. Drishyam 2 Confirmed Ahead Of Superstar Mohanlal’s 60th Birthday!

Not just Hindi, the film was also remade in Drushyam (Telugu), Papanasam (Tamil) and Drishya (Kannada). Given that currently, all the film shootings are on hold due to coronavirus lockdown, it has been reported that Mohanlal will begin shooting for the sequel as soon as the lockdown is lifted and is expected to finish the film in two months. The teaser looks intriguing and we are expecting the sequel to go a notch higher than the first one. From Memories to Drishyam, 5 Memorable Thrillers That Jeethu Joseph Has Given to Malayalam Cinema.

Drishyam original's team is coming back together for the sequel and hence it is being produced by Antony Perumbavoor. Mohanlal was last seen in Big Brother and before that he was also recently seen in Malayalam blockbuster Lucifer which is also getting a sequel. This is not the only project that Mohanlal and Jeethu Joseph have come together for, their other project which kicked off in December 2019 has been titled Ram.

(The above story first appeared on LatestLY on May 21, 2020 02:10 PM IST. For more news and updates on politics, world, sports, entertainment and lifestyle, log on to our website latestly.com).