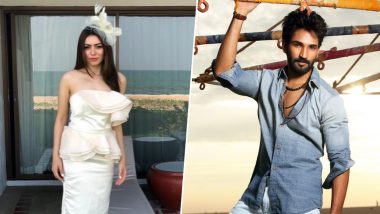 Hansika Motwani recently topped the headlines for her upcoming film Maha. The reason behind it, her ex-flame Silambarasan aka Simbu will also be playing a key role in the film directed by U.R. Jameel. Now fans of Hansika and Aadhi Pinisetty are excited as these two stars are collaborating for a project. Hansika would be sharing screen space with the Rangasthalam actor in Manoj Damodharan’s upcoming project. Ex-Flames Hansika Motwani and Simbu to Work Together in UR Jameel’s Maha?

Manoj Damodharan’s upcoming film starring Hansika Motwani and Aadhi is titled Partner. The film produced under the banners of RFC Creations started with a puja for which the Aadhi and the team were seen in attendance. But the 27-year-old actress Hansika wasn’t seen for the puja. Santhosh Dhayanidhi, who made his music debut with the 2015 released Inimey Ippadithan, would be composing the music for Partner as well. Did Vijay-Atlee’s Thalapathy 63 Mint Rs 55 Crores Even Before Release?

Take a look at the pictures from the puja ceremony of Manoj Damodharan’s upcoming project:

On the work front, Aadhi was last seen in the thriller film U Turn. The film directed by Pawan Kumar also starred Samantha Akkineni in the lead. His film Rangasthalam, directed by Sukumar grossed approximately more than Rs. 200 crores worldwide. Meanwhile, Hansika Motwani is busy shooting for the Tamil films 100 and Maha. The actress had a special appearance in the recently released N.T.R: Kathanayakudu. Stay tuned for further updates.

(The above story first appeared on LatestLY on Mar 20, 2019 01:34 PM IST. For more news and updates on politics, world, sports, entertainment and lifestyle, log on to our website latestly.com).