Ex-Flames Hansika Motwani and Simbu to Work Together in UR Jameel’s Maha? 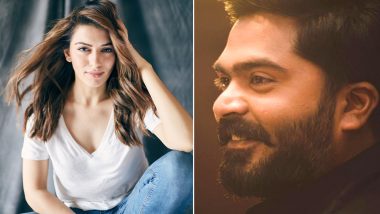 The upcoming Tamil-language film Maha will be Hansika Motwani’s 50th film and that too as a lead actress. This Tamil thriller is directed by U.R. Jameel and it has already grabbed eyeballs of the actress’ fans. According to the latest reports, Hansika’s ex-boyfriend Silambarasan aka Simbu will also be a part of the film. So are Hansika and Simbu reuniting again? Read further to know all the details. Hansika Motwani Slams Trolls Who Accused Her of Leaking Private Pics for Publicity.

According to a report in TOI, Simbu will be making a special appearance in Maha. Leaving behind all the issues that had happened between them, the actor has apparently given a nod to do the film with his ex-flame. Simbu will essay the role of Shoiab and his scenes will apparently be shot in Istanbul. It is also said that Hansika Motwani’s ex-boyfriend will be featured in a special song that is composed by Ghiran. Pudhupettai Stars Dhanush and Sneha to Reunite in Durai Senthilkumar’s Next?

Here are some of Hansika Motwani’s pictures:

Speaking of this former couple, Hansika Motwani and Simbu dated for few years and they even made it official on Twitter. But due to certain differences, the duo called it off and decided to part ways. Other than this buzz, Hansika was recently involved in a trouble when her New York holiday pictures were leaked online. The actress even mentioned that her phone and Twitter account was hacked and requested fans to not respond to any messages. But haters of this young actress accused her of doing publicity stunt.

(The above story first appeared on LatestLY on Mar 06, 2019 10:09 AM IST. For more news and updates on politics, world, sports, entertainment and lifestyle, log on to our website latestly.com).