Jiiva Birthday: Here’s Looking At Films Of The Kollywood Actor That Became A Commercial Success!

Jiiva is predominantly known for his works in Kollywood. Son of producer RB Choudary, this handsome hunk celebrates his 37th birthday today! 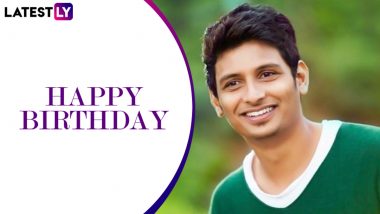 Jiiva, an actor and producer, is predominantly known for his works in Kollywood. Son of producer RB Choudary, Jiiva who celebrates his 37th birthday today, had made his acting debut as a child artiste. It was in 1991 when he stepped into the world of cinema and it was in his father’s 50th production, he made his debut as a lead actor. Kalathil Santhippom Teaser: Jiiva and Arulnithi Give Friendship Goals in This Action-Packed Entertainer.

Throughout these years, Jiiva has done amazing films and has been praised fans and critics for doing brilliant roles. Some of his films have also been a huge hit at the box office. On the occasion of his birthday, let’s take a look at those films that became a commercial success. 83 The Film: Bollywood Debutant Jiiva’s Look as Stroke Play Sensation Krishnamachari Srikkanth Wins Our Hearts.

E - Directed by SP Jananathan, this thriller flick starred Jiiva (who plays titular role) and Nayanthara in the lead. Jiiva, who played the role of an orphan, brought in slums of Chennai, put up a power-packed performance in this movie. The film released in 2006 was commercially successful.

Ko – A political action thriller directed by KV Anand, this blockbuster film revolved around a photojournalist (played by Jiiva), extends his support to a friend contesting in the upcoming elections, later gets to know he has connections with Naxalites.

Nanban – Remake of Aamir Khan’s Hindi film 3 Idiots, this commercially successful film starred Thalapathy Vijay, Jiiva, Srikanth, Ileana D’Cruz, Sathyaraj and Sathyan in the lead. Jiiva played the character Sevarkodi, who belongs from a poor family, whose mother is a retired teacher and father is paralysed.

Endrendrum Punnagai – This rom-com featuring Jiiva, Trisha, Vinay, Santhanam, Andrea and Nassar in the lead, written and directed by I Ahmed, had opened to positive reviews. Revolving around friendship, romance and aspirational lifestyles, even this movie was a huge hit at the box office.

These are some of the films of Jiiva that have been commercially successful. Here’s wishing him a very happy birthday and many more successful projects!

(The above story first appeared on LatestLY on Jan 04, 2021 08:15 AM IST. For more news and updates on politics, world, sports, entertainment and lifestyle, log on to our website latestly.com).