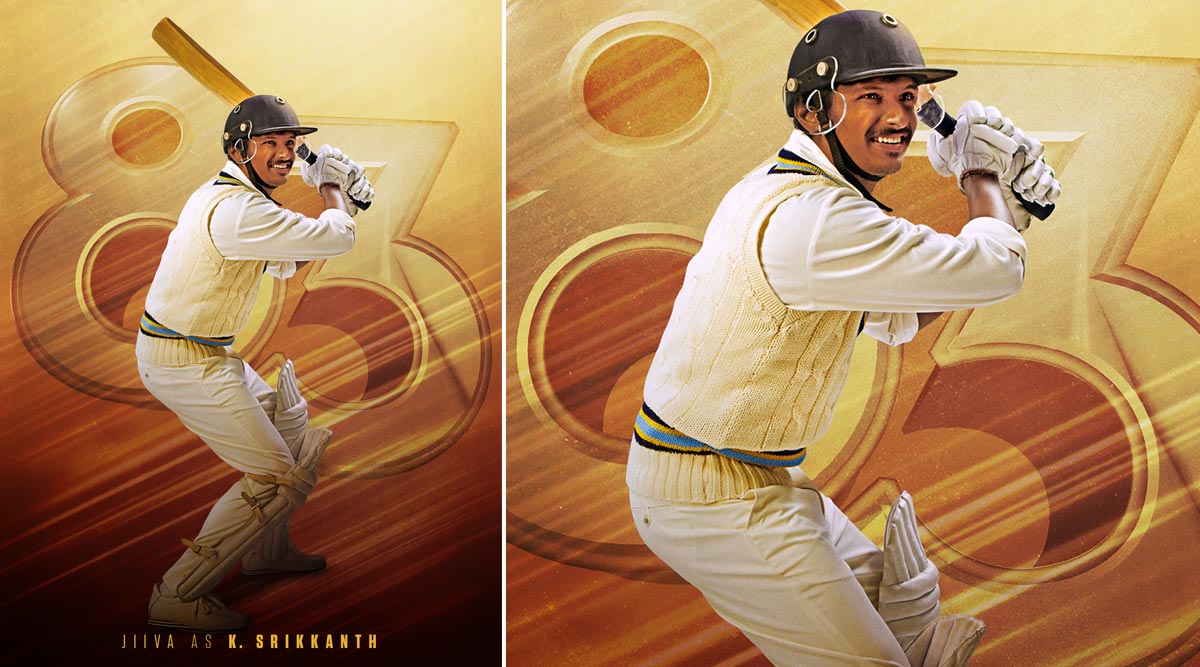 Jiiva As Krishnamachari Srikkanth in 83 The Film (Photo Credits: Instagram)

The makers of 83 The Film have released another character poster and this time it is of Tamil actor Jiiva. The handsome hunk of Kollywood, Jiiva, is all set to make his Bollywood debut with Kabir Khan’s directorial, 83 The Film. We all were eagerly waiting to see his look in the film, and here it is! Bollywood debutant Jiiva’s look as stroke play sensation Krishnamachari Srikkanth has won our hearts. He is all set to showcase the legendary cricket player’s amusing batting style on the big screen, and we just cannot wait for it. 83 The Film: Ranveer Singh Shares Tahir Raj Bhasin’s Look as Legendary Sunil Gavaskar, and This ‘Little Master’s’ Avatar Is Impressive (View Pic).

Jiiva shared his look from the film across social media platforms. He captioned it as, “Inki batting ka kya kehna! I'm forever grateful for the opportunity to play him on the big screen. Presenting the Indiana Jones of Indian cricket, #KrishnamachariSrikkanth! #ThisIs83”. Even Ranveer Singh introduced the world to the reel-life Srikkanth by sharing the same still but with a zara hatke caption. He wrote, “IT’S CHIKA, MACHA !!! The Swashbuckling South Indian Strokeplay Sensation! Presenting @actorjiiva as #KrishnamachariSrikkanth! #ThisIs83”. 83 The Film: Ranveer Singh Shares the Logo of Kabir Khan Directorial (View Pic).

It was in January 2019 when the makers confirmed that Jiiva is on-board for 83 The Film. Talking about working on this project, Kabir Khan was quoted as saying, “As a filmmaker, for me, the journey to that win (India’s win in 1983 World Cup), filled with raw energy and sheer passion of that young Indian team, is probably one of the most exciting stories I have worked on,” reports PTI. The film is all set to be released on April 10, 2020.

Comments
Tags:
83 The Film 83 The Film Character Posters 83 The Film Poster Jiiva Jiiva As Krishnamachari Srikkanth Jiiva As Srikkanth Kabir Khan Ranveer Singh Tamil Actor Jiiva This Is 83
Comments
You might also like