Mohanlal is an actor who gave Malayalam movie lovers many moments to laugh, and many to cry. Here are some of our favourite onscreen heartbreaks performed by the 'Complete Actor. 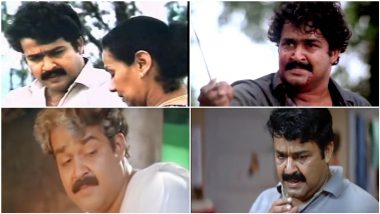 Mohanlal - one of India's finest actors - is turning a year older on May 21. And with his age, his popularity is also increasing like exponentially. The National Award-winning actor is presently enjoying doing masala entertainers and period dramas, but he gave us some very fond movies and performances in the past that not only made us laugh a lot, but also destroyed our hearts with some gut-wrenching performances. There is a reason why we call him the 'Complete Actor'. Mohanlal Birthday Special: 5 Cameos of the Malayalam Superstar That Show Lalettan’s Brilliance Even in Small Doses.

In this special feature, we look at 10 scenes of the superstar from his golden era that left us emotionally racked and completely in tears.

It's merely a small scene, but Mohanlal's depiction of a man yearning to have that life he had on borrowed time is simply heartbreaking. Don't say you didn't break into tears, when he said "Enne kolaathe vithude?"

Click here if you can't watch the scene in the above window...

Caution - The above scene is emotionally troubling and very affecting, especially the depiction of suicide that begins with a playful game. Do not watch if you are feeling low, as it can trigger something.

If I have to discuss the best emotional scenes of Mohanlal, pretty sure any Malayalam movie lover would come up with Kireedam's tragic climax. Easily one of the best acted scenes in Mohanlal and the late Thilakan's careers. Mohanlal Birthday Special: From Lucifer to Drishyam, 7 Best Films of Malayalam Superstar of The 21st Century Ranked by IMDb.

Every time I have watched it, this scene landed me in tears... just everytime... What a subtle emotional delivery from Lalettan!

The final scene of Pavithram is so troubling that it is not easy to rewatch this movie, knowing that it would end here. I still can't believe Mohanlal never got a National Award for this scene alone!

Mohanlal won his first National Award for Best Actor for this film. While the movie is replete with his fine acting moments, the scene where he breaks down after receiving his dead brother's blood-stained clothes is easily a wrecked standout. Mohanlal Birthday Special: 15 Quirky Phrases of the Malayalam Superstar That Became Part of Our Vocabulary.

Ah, the last scene. Why Priyadarshan, why did you trick us by serving comic gold through most of movie's runtime only to end with a downbeat climax to a love story? And that BGM... man, I still remember spending the whole day morose after watching Vandanam for the first time. If only there were cellphones...

Click here if you can't watch the scene in the above window...

Sooryagayathri remains one of Mohanlal's underrated family movies, and it is not hard to see why families don't keep it on their rewatch list. The movie tumbles you down a cesspool of despair after the first half focussing on breezy father-son bonding. The highlight of the movie is the third act when Mohanlal's character kidnaps the culprits for his son's demise, but doesn't bring himself up to carry out his revenge. Mohanlal simply breaks your heart in this, and the followup scene at the college.

Mohanlal broke everyone down with his emotionally-wrecking performance as a family man slowly falling victim to Alzheimer's. While it is hard pick to choose one moment that doesn't tear your up, I believe the finale would have an edge over the rest.

Bhramaram gave you the signs that it is going to be a road trip revenge thriller, but the ending and its emotional twist left many unexpectedly shattered. And when Mohanlal lets out his emotions, you are pretty sure everyone in the theatre is going to need some sad tissues!

(The above story first appeared on LatestLY on May 21, 2022 08:51 AM IST. For more news and updates on politics, world, sports, entertainment and lifestyle, log on to our website latestly.com).