Naranipuzha Shanavas, Malayalam Cinema’s director and screenwriter, passed away on December 23 morning in a hospital in Coimbatore. 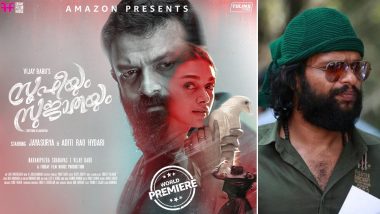 Naranipuzha Shanavas, Malayalam Cinema’s director and screenwriter, passed away on December 23 morning in a hospital in Coimbatore. He was reportedly declared brain dead on today morning. His film Sufiyum Sujathayum, starring Jayasurya and Aditi Rao Hydari, was the first Malayalam movie to hit OTT platform. The filmmaker was rushed to the hospital after he went into cardiogenic shock during the shooting of his upcoming film in Attapadi, Kerala. HG Somashekara Rao, Renowned Kannada Actor, Passes Away at 86.

The PRO at KG Hospital in Coimbatore had told TNM, “He was brought here on Saturday night. He is in the ICU and is not stable now. Doctors are monitoring him.” The 40-year-old filmmaker was on on ventilator support and there was no health improvement seen in him from the time he was admitted. The news of his demise has left everyone shocked.

(The above story first appeared on LatestLY on Dec 23, 2020 11:23 AM IST. For more news and updates on politics, world, sports, entertainment and lifestyle, log on to our website latestly.com).