Noted Kannada actor, author, theatre personality and writer, H.G. Somashekara Rao, popularly known as Somanna, breathed his last on Tuesday at a private hospital due to age related health issues. He was 86. Somanna is survived by his wife and two children. 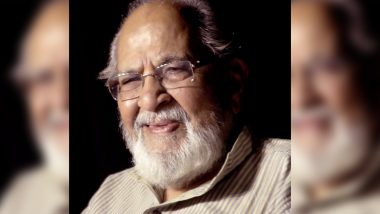 Noted Kannada actor, author, theatre personality and writer, H.G. Somashekara Rao, popularly known as Somanna, breathed his last on Tuesday at a private hospital due to age related health issues. He was 86. Somanna is survived by his wife and two children. The son of freedom fighter Harihar Gundu Rao, Somanna hailed from Chitradurga district. His younger brother and veteran film actor, Dattanna, had passed away just a week ago and his younger sister had also died about a month ago. Vijay Reddy, Popular Kannada Film Director, Passes Away At 84

According to close family friends, Somanna was terribly upset after he lost his siblings in quick succession. It was reported that while he was on his way to a private hospital for regular treatment, he suffered a massive heart attack. Somanna is best known for his acting prowess in cult Kannada films like 'Accident', 'Mithileya Seeteyaru', 'Minchina Ota', 'Savithri', 'Harakeya Kuri' and more. He won a state award for the supporting role in the movie 'Harakeya Kuri' in 1992-93. Babu Sivan Dies At 54: Director Of Thalapathy Vijay Starrer Vettaikaaran Passes Away Due to Kidney Failure

He made his debut in Kannada movie 'Savithri' against famous actor Anil Thakkar in 1981. He left indelible mark for his serious role in this movie. Somanna, who was also popularly known as 'HGS' to his contemporaries, had authored around 25 books, including books like 'Somannana Stockninda' and 'Innobarannu Ariyuva Bage'. He has served in the capacity of both the principal and the chairman of Abhinaya Taranga, a famous theatre school.

He not only earned accolades for his serious roles, but also made a mark in the comedy genre. He was not only an actor but also a banker, who worked with Canara Bank and was also instrumental in setting up a training centre for Canara Bank employees to train them on various facets of banking. The Sandalwood fraternity mourned the death of the veteran actor.

Director Kiran Raj had worked with Somanna in '777 Charlie'. He mourned the death of the actor on Facebook by sharing a post which read, "I had the opportunity to work with Somashekar sir in Charlie, I learnt a lot from him in a few days. Respectful salutations to the elderly who left us all today. Om Shanthi(sic)."

(The above story first appeared on LatestLY on Nov 04, 2020 12:44 PM IST. For more news and updates on politics, world, sports, entertainment and lifestyle, log on to our website latestly.com).