Olivia Morris Plays Jennifer In SS Rajamouli's RRR; Here's What We Know About Her

Olivia Morris is creating a lot of traction on social media since SS Rajamouli announced her as the Jennifer from RRR. Her first look has caught up too, so we did some digging to know who she is. Know all about her right here. 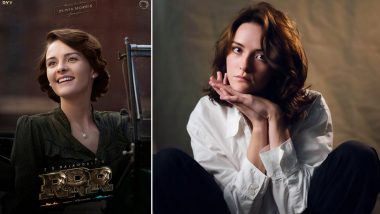 S S Rajamouli created sensation today by revealing British actor Olivia Morris as Jennifer for his magnum opus RRR. She plays a British in the pre-independent era who is the love interest of Jr NTR. Her first look was extremely dreamy with the perfect vintage hairstyle. Keeping up with the tradition, the announcement was made today as it happens to Morris' birthday too. Since then people were a little intrigued about who is Olivia Morris. Truth be told, the internet doesn't have much on her but we still managed to find a few details about Morris. ‘Maidaan’ vs ‘RRR’ Clash on October 13: Exhibitors Will Suffer, Feels Industry

Morris' IMDb suggests she is fairly new to showbiz and RRR is her first international feature film. She recently graduated from Royal Welsh College of Music & Drama. We moved to her agency InterTalent Rights Group: Actors & Creatives Division's website to know more about here. Olivia is skilled in Ballet, Laban, Modern Dance, Singing (general). Her other skills include bartending and circus skills among others.

The only other content that Morris has shot, as per IMDb, is an adventure mini-series 7 Trails In 7 Days and was an ATV rider in one of its episodes called Indian Ridge. Check it out here.

So we can safely guess that Olivia Morris will debut in the world of cinema with S S Rajamouli's RRR. We wonder when will she share the look on her accounts as well.

(The above story first appeared on LatestLY on Jan 29, 2021 02:00 PM IST. For more news and updates on politics, world, sports, entertainment and lifestyle, log on to our website latestly.com).