Pawan Kalyan is not just a star, he is an emotion. His fans wait with bated breath just to catch a glimpse of the superstar. And recently, the superstar was in Tirupati for a political rally and his fans left no stone unturned to shower him with love. Check out the video. 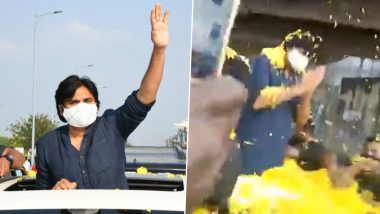 South actor Pawan Kalyan is not just a star, he is an emotion. His fans wait with bated breath just to catch a glimpse of the superstar. And ever since, the actor has announced his comeback to the entertainment industry, his admirers are on cloud nine. Pawan's upcoming film Vakeel Saab's teaser which was unveiled a while back had received a thunderous response. And now, the star has once again created a stir online. In a viral video,  PSPK can be seen greeting his fans during a political rally in Tirupati, and what happens next is magical. Pawan Kalyan’s Vakeel Saab Teaser Out! Netizens Are Blown Away With the Swag of the Power Star.

In the clip, the actor can be seen showered with many flowers amid the rally. The visual is spectacular and we bet it speaks volumes about the power of the star. He can be seen waving his fans and also folding hands unaware that there is a special surprise for him by his admirers. Indeed, he is huge in showbiz as well as politics and the video proves it all. Vakeel Saab Teaser: Pawan Kalyan Makes Sure His Comeback Is Stylish and Powerful (Watch Video).

His fan base is so special and their love is so pure 🙏😍 @PawanKalyan in Thirupathi today. #Janasena #VakeelSaab pic.twitter.com/MdV0TYCNwg

Pawan Kalyan had said goodbye to films two years back with an aim to concentrate on his political career. However, he is back with Vakeel Saab, which will soon make it to the big screen. The film is helmed by Venu Sriram. Coming back to the above video, we are totally smitten by the flowery love on the superstar by his fans. Stay tuned!

(The above story first appeared on LatestLY on Jan 21, 2021 09:24 PM IST. For more news and updates on politics, world, sports, entertainment and lifestyle, log on to our website latestly.com).