The troop put up a brilliant performance on the show's latest episode on the Rajinikanth number and even had the judges dancing to it. 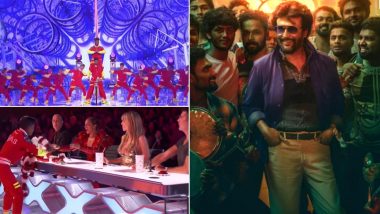 If you happen to be a Rajinikanth fan, you probably know that Thalaivar has some of the greatest foot-tapping numbers and guess what? His popular song "Marana Mass" from Petta has now gone international thanks to the Mumbai based dance troop V Unbeatable who after finishing fourth in America’s Got Talent season 14, returned to the US for America’s Got Talent: The Champions Season 2. The troop put up a brilliant performance on the show's latest episode on the Rajinikanth number and even had the judges dancing to it. Rajinikanth in 'Man Vs Wild' Funny Memes Start Trending Online as Thalaiva Fans Say The Animals Will Have to 'Mind It!'.

A video of V Unbeatable's performance was shared by composer Anirudh Ravichander who took to Twitter to share his excitement over the same. The composer wrote, "OMG! Unbelievable and mindblowing performance by these guys for Thalaivars Marana Mass at America’s got talent!

V Unbeatable's electrifying performance won a lot of praises from judges Simon Cowell, Heidi Klum, Howie Mandel and Alesha Dixon. The already energetic number got even more intensity thanks to the dance group's act which consisted of bicycle stunts among others.

Not just this Howie Mandel even took to Twitter to call it the best act that he has ever seen on any of the talent shows. Sharing a clip of the performance, he wrote, "This is BY FAR the BEST act that has ever graced any of the stages on any talent show. @v_unbeatable brings more passion and dedication than ANY group I’ve ever seen. I hope they WIN! #AGTChampions."Petta Song Marana Mass: Anirudh Ravichander Belts An Instant Chartbuster For Rajinikanth That Lives Up To Its Name - Watch Video.

If you watch this video, we bet you will agree with Howie that it is indeed one of the most energetic acts we have seen in a while. We bet Thalaivar will be proud too!

(The above story first appeared on LatestLY on Feb 12, 2020 11:49 AM IST. For more news and updates on politics, world, sports, entertainment and lifestyle, log on to our website latestly.com).