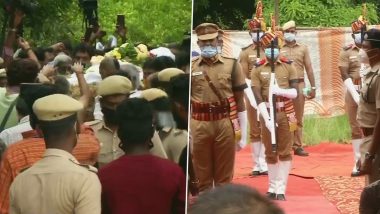 The mortal remains of famous playback singer and Padma awardee S.P. Balasubrahmanyam, popular as SPB or Balu in the movie world, was laid to rest with police honours at his farmhouse near here on Saturday. At about 12.30 p.m. SPB's body was lowered into a dug up pit bringing to end a great musical era. The legendary singer who has recorded over 40,000 songs in 16 languages over a period of five decades, died on Friday afternoon due to cardio-respiratory arrest at the M.G.H. Healthcare. SP Balasubrahmanyam Funeral: Thalapathy Vijay Attends The Last Rites Of The Legendary Singer Performed By His Son SPB Charan (View Pics).

Earlier in the day, hundreds of people stood in a long queue to pay homage to the singer as well as celebrities from the movie world at the farm house.

The singer's family performed the last rites. The mortal remains were brought to the farmhouse on Friday evening. On Friday, a large number of people gathered at his residence here to have a last glimpse of the singer and pay their respects.

Later in the evening, his body was taken in a van to his farmhouse at Thamaraipakkam. Enroute several people stood on the pavement and bade SPB a tearful goodbye.

On August 5, in a Facebook post, the 74-year-old SPB said that he was suffering from a very mild attack of coronavirus and had got himself hospitalised to take a rest.

He had said that though the doctors had advised him to stay at home and take a rest, he decided to be in a hospital, as at home his family members would get concerned. SPB hoped to get discharged from the hospital in two days. But it was not to be.

(The above story first appeared on LatestLY on Sep 26, 2020 02:29 PM IST. For more news and updates on politics, world, sports, entertainment and lifestyle, log on to our website latestly.com).