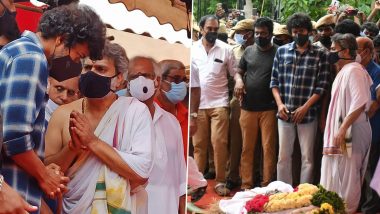 We lost one more legendary artists of Indian Cinema yesterday after S P Balasubrahmanyam breathed his last. His melodious voice is gone forever. All we have are his songs that will always be our favourite part of Salman Khan's career. The shock of losing him will never be gone. His last rites are being performed right now and Vijay was spotted paying his last respects. Pictures from the funeral are hitting the internet and SPB's son can be seen performing the last rites. Everyone is seen wearing masks. RIP SP Balasubrahmanyam: AR Rahman’s Tribute To The Late Legendary Singer Will Take You On a Nostalgia Ride (Watch Video)

City Armed Reserve Police Personnel even gave a gun salute to the SPB at the funeral. That's how respected and revered that man was. He has been part of Indian Cinema for five decades.

SPB has inspired generations with his songs. This is one loss we will never be able to get over.

(The above story first appeared on LatestLY on Sep 26, 2020 02:16 PM IST. For more news and updates on politics, world, sports, entertainment and lifestyle, log on to our website latestly.com).