Soorarai Pottru: This Still Of Suriya with Aparna Balamurali Is Winning Hearts!

Soorarai Pottru is one of the mots-awaited films of Suriya with Aparna Balamurali paired opposite him. It is produced under the banners of 2D Entertainment and Sikhya Entertainment, and is slated to release on April 9. 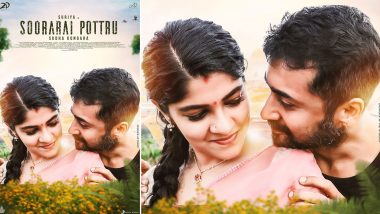 Soorarai Pottru is one of the most-awaited films of Suriya, with Aparna Balamurali paired opposite him. Directed by Sudha Kongara, the one who has helmed the movies – Drohi (Tamil), Irudhi Suttru/Saala Khadoos (Tamil/Hindi) and Guru (Telugu) – she is all set to give Kollywood lovers another intriguing film with Soorarai Pottru. A still featuring Suriya and Aparna is doing rounds on the internet, and after seeing that, fans just cannot wait to see the duo’s chemistry on the big screens. Soorarai Pottru Teaser: Suriya Seems to Be in His Best Form in This Inspiring True Story of a Man With an Extraordinary Dream.

Aparna Balamurali, who also works in Malayalam cinema, is known her role as Jimsy in Maheshinte Prathikaaram and Anu in Sunday Holiday. This is the first time that Suriya and Aparna would be sharing screen space. We did get to catch a glimpse of the duo’s romance when the makers released the second single from Soorarai Pottru, titled "Veyyon Silli". In this still, Aparna is seen all smiles as her onscreen husband Suriya snuggles upto her. These two are winning hearts of the movie buffs already! Soorarai Pottru: Suriya Starrer Based On Captain GR Gopinath's Life to Release in Kannada?

Still Of Suriya With Aparna Balamurali From Soorarai Pottru

I am waiting to see these lovable character’s on screen! How #SudhaKongara made them 😍❤️ Madly waiting to see #SooraraiPottru 💥 pic.twitter.com/EyKqrO8ugG

Soorarai Pottru, produced under the banners of 2D Entertainment and Sikhya Entertainment, is slated to release on April 9. However, we’ll have to wait and see if the makers have any plans to push the release date due to the ongoing coronavirus scare across the globe. The government has asked the citizens to avoid large gatherings in order to contain the spread of COVID-19. There are many filmmakers and producers (across industries) who have decided to postpone the shooting of their projects and also push the release dates of the movies that were supposed to hit the screens this month.

(The above story first appeared on LatestLY on Mar 14, 2020 09:49 AM IST. For more news and updates on politics, world, sports, entertainment and lifestyle, log on to our website latestly.com).