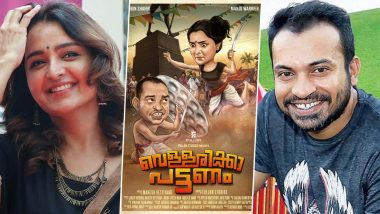 Manju Warrier and Soubin Shahir are coming together for the upcoming Malayalam film Vellarikka Pattanam. This isn’t the first time that these two stars would be collaborating for a movie. Manju and Soubin will also be seen in Santosh Sivan’s Jack & Jill. We are sure, Mollywood lovers would be thrilled to see the two actors together in a film! Kayattam: Manju Warrier Treats Fans With A New Poster Of Her Maiden Production Venture.

Vellarikka Pattanam will mark the directorial debut of Mahesh Vettiyaar. Lead actress Manju Warrier has shared the first look poster of the film on Facebook. “#VellarikkaPattanam Very happy to share the first look poster of my next ! Can't wait to join this super fun team with dearest @soubinshahir !!! Directed By Mahesh Vettiyaar,” she wrote. The poster features animated version of the lead actors. Manju is seen holding a sword and seem to be in an attack mode, on the other hand, Soubin who looks a bit frightened of her is seen holding a shield that looks like a idli plate and also a sword.

Vellarikka Pattanam is touted to be a family entertainer. Talking about the shooting schedule director Mahesh Vettiyaar was quoted as saying, “It’s not a film that took shape during the lockdown. In fact, Manju and Soubin were supposed to start work on the movie as soon as they finished their schedules in Lalitham Sundaram and Djinn, respectively,” reports TOI. Bankrolled by Fullon Studios, the makers are yet to share the release date.

(The above story first appeared on LatestLY on Sep 13, 2020 02:18 PM IST. For more news and updates on politics, world, sports, entertainment and lifestyle, log on to our website latestly.com).