Malayalam actress Manju Warrier took to social media to release a brand new poster from her maiden production venture Kayatttam. This was indeed one of the best treats that her fans could get on the occasion of Eid 2020. 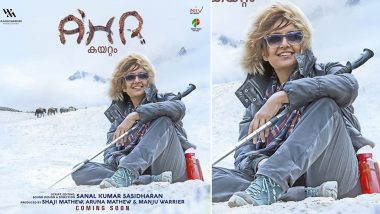 Be it any festive season, fans have got some amazing surprises from their favourite celebs. It could be announcement of new projects, releasing new posters or songs, and much more. Yesterday (May 24), we saw how Mollywood’s handsome hunk Dulquer Salmaan left his fans awestruck with a stylish new poster from his upcoming flick Kurup. There is another gorgeous celeb from the Malayalam film industry who has left all her fans stunned by releasing a new poster, and we’re talking about Manju Warrier. Kurup: Dulquer Salmaan Drops an Eid Treat For His Fans As He Shares His Stylish Second Look from the Film On Its Pre-Coronavirus Release Day!

Malayalam actress Manju Warrier took to social media to release a brand new poster from her maiden production venture Kayattam. This was indeed one of the best treats that her fans could get on the occasion of Eid 2020. We can see Manju in the avatar of a mountaineer, who is all smiles as she rests on the snow-clad mountain. While sharing the poster, Manju captioned it as, “Coming soon! #kayattam #kayattammovie #ahr Eid Mubarak!” This indicates that the makers have plans to make an announcement about its release date. Manju Warrier and Film Crew, Stranded in Himachal Floods, to be Rescued Soon, Confirms MoS V Muraleedharan.

Kayattam is written and helmed by award-winning filmmaker Sanal Kumar Sasidharan. Produced under the banner of Manju Warrier Productions, this film is touted to be set against the backdrop of mountaineering. The other projects that Manju has in her kitty are Marakkar: Arabikadalinte Simham, Jack and Jill, The Priest, Lalitham Sundaram and Padavettu.

(The above story first appeared on LatestLY on May 25, 2020 11:03 AM IST. For more news and updates on politics, world, sports, entertainment and lifestyle, log on to our website latestly.com).