Starring Dino Morea, Kunal Kapoor, Shabana Azmi, Drashti Dhami, and others, the show released on Disney+ Hotstar today (August 27). Kunal Kapoor is seen in the role of Mughal emperor Zahir ud-Din Muhammad Babur in The Empire while Dino essays the role of the antagonist in the show. 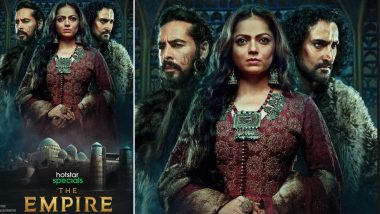 Created by filmmaker Nikkhil Advani of Emmay Entertainment, The Empire traces the origins of a historic dynasty. Starring Dino Morea, Kunal Kapoor, Shabana Azmi, Drashti Dhami, and others, the show released on Disney+ Hotstar today (August 27).  Kunal Kapoor is seen in the role of Mughal emperor Zahir ud-Din Muhammad Babur in The Empire while Dino essays the role of the antagonist in the show. The Hotstar Specials' show is based on Alex Rutherford's 'Empire of the Moghul', a historical fiction novel that begins with Babur and ends with the reign of Aurangzeb. Directed by Mitakshara Kumar, the show is produced by Monisha Advani and Madhu Bhojwani. Hours after its release online, The Empire Full Episodes in HD have been leaked by TamilRockers and various Torrent sites for free download. These illegal websites also provide an option to watch The Empire Full Episodes online! The Empire Review: Kunal Kapoor, Drashti Dhami Are Impressive in Disney+ Hotstar's Half-Baked Historical Drama Series.

Just like many web shows in the past, Kunal Kapoor, Dino Morea's show has also became a prime target of piracy websites across the globe. The film is available on sites like torrentz2.eu. They claim to provide the full movie with a duration of three hours is available for anyone to watch for free. You can see the site as it provides options for watch online and download such as Avengers Endgame (2019) 720p HDCAM-Rip in 866MB, 2040MB, 2039MB, 2040MB and 1703MB! This photo breaks our heart as torrent sites fearlessly share leaked copies on the internet. However, helping these nefarious piracy sites grow are those so-called movie buffs who do not mind watching movies illegally on shady sites.

This surely will affect the views of the show and it is pretty sad to see how piracy is increasing every day so easily and no action is being taken against such people. Meanwhile, talking about his character, Shaybani Khan, Dino earlier had said, "The look for the show is something director Mitakshara & I worked on. We needed Shaybani Khan to be deadly, and from the feedback, I've been getting, I think we have succeeded. Everyone who has seen the trailer so far has loved Shaibani Khan's look. Comments like savagely sexy to delicious - quite interesting I'd say."

Being compared to Ranveer Singh's character in Padmaavat, Dino said, "Khilji is obviously a compliment, Ranveer looked & played that part beautifully." Director Mitakshara talked about her vision for Dino's character, "I feel animals are a great reference point for behaviourism. Their instincts are bang on. And so, I told Dino that he should study a Panther. Regal and subtle, patiently waiting for its prey and they attack without warning. And Dino understood that so well. He has done a great job and justice to the character."

(The above story first appeared on LatestLY on Aug 27, 2021 12:48 PM IST. For more news and updates on politics, world, sports, entertainment and lifestyle, log on to our website latestly.com).