Yesterday's (Feb 6) episode of Bigg Boss 14 saw Salman Khan in a very bad mood where he was seen blasting at the contestants. And tonight, we will get to see Rubina Dilaik opening a can of worms and revealing some dark secrers from her past. Watch! 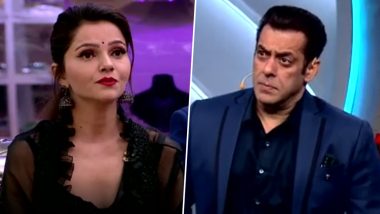 Yesterday's (Feb 6) episode of Bigg Boss 14 saw Salman Khan in a very bad mood where he was seen blasting at the contestants. Right from slamming Rakhi Sawant for her nasty entertainment and derogatory words on the show to showing Rubina Dilaik the true meaning of content, the host spared none. And now, as per the latest promo, Salman quizzes Rubina's sister Jyotika if the actress is the same at home. To which Jyotika replies to Khan that he should also understand Rubina's point of view. Bigg Boss 14: Jasmin Bhasin Calls Beau Aly Goni 'One Man Army' For His Fair Play On the Show.

However, then we see Jyotika sobbing and Rubina opening a can of worms from her past life. The Shakti actress explains to the host that she was had temper issues and suicidal thoughts eight yeara ago. She also added that she was not on good terms with her parents and her behaviour was the major reason for her relationship going for a toss. After seeing this, her sister adds that Rubina has gotten emotionally weak. Bigg Boss 14: Arshi Khan Evicted From Salman Khan’s Reality Show – Reports.

Check Out The  Video:

Salman's main aim on Weekend Ka Vaar tonight is going to show Rubina the path to go right on the reality show. Well, that is why we say, no one can replace Salman Khan as the host of Bigg Boss, as there's no one like him. Meanwhile, it's reported that Arshi Khan will get evicted from the reality show. Stay tuned!

(The above story first appeared on LatestLY on Feb 07, 2021 06:54 PM IST. For more news and updates on politics, world, sports, entertainment and lifestyle, log on to our website latestly.com).