Last weekend, we saw how Vikas Gupta sacrificed himself and saved Devoleena Bhattacharjee (Eijaz Khan's proxy) from elimination. And now, the latest we hear is that it's Arshi Khan who is going to get evicted from the reality show. Check it out. 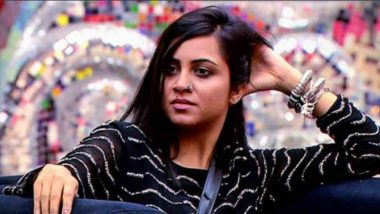 Last weekend, we saw how Vikas Gupta sacrificed himself and saved Devoleena Bhattacharjee (Eijaz Khan's proxy) from elimination. And now, the latest we hear is that it's Arshi Khan who is going to get evicted from the reality show. Yes, you read that right! As per The Khabri, it's challenger Arshi who will say goodbye to the controversial show. If the above report is true then sadly she will not be a part of the family week wherein her brother was supposed to enter BB house as her connection. Bigg Boss 14: Salman Khan Schools Rakhi Sawant for Her Nasty Entertainment, Asks Her To Quit the Show (Watch Video).

Arshi gave a hell lot of TRPs to the show. Right from poking Vikas Gupta on national TV and talking ill about him to even arguing with Rahul Vaidya and Devoleena, she played her game well. It was on last night's (Feb 5) episode, when Arshi and Devo also had a huge fight owing to the former's nasty comment on the latter's family. Not just the latest season, Arshi was also seen on Bigg Boss 11. Bigg Boss 14: Devoleena Bhattacharjee Blasts Arshi Khan and Rubina Dilaik, Destroys House Property (Watch Video).

Exclusive and Confirmed. Yes there is elimination and its Shocking

First on The Khabri

However, there has been no official confirmation by the makers on her elimination yet. Talking about Arshi's survival strategy on the reality show, it was strong, but not long term. For example, in the initial days, she was friends with Aly Goni and Rahul Vaidya, but after a few weeks, she was team Rubina Dilaik.

Meanwhile, tonight's episode (Feb 6) of Bigg Boss is going to witness Salman Khan in quite an angry mood as he will be seen blasting Rakhi Sawant for her nasty entertainment. That's not it, the host will spare none and that's going to be the highlight of Weekend Ka Vaar. Stay tuned!

(The above story first appeared on LatestLY on Feb 06, 2021 07:31 PM IST. For more news and updates on politics, world, sports, entertainment and lifestyle, log on to our website latestly.com).