And television's dimpled God is taken. Actor Vishal Karwal, who has played the charming Lord Krishna on Television multiple times, is off the market. The actor tied the knot with his good friend Heena on October 28 in his hometown, Palampur in Himachal Pradesh. 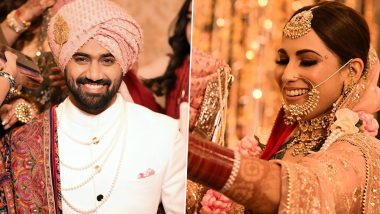 And television's dimpled God is taken. Actor Vishal Karwal, who has played the charming Lord Krishna on Television multiple times, is off the market. The actor tied the knot with his good friend Heena on October 28 in his hometown, Palampur in Himachal Pradesh. Heena and Vishal were in a relationship for the past year-and-a-half. Vishal amassed a huge fan following with his participation in Splitsvilla, Bigg Boss and other television shows. Vishal Karwal On His First Lord Krishna Act: 'My Producer Suggested That I Watch the Old 'Mahabharat', But I Was Determined to Do My Own Thing'.

"Owing to the lockdown and the pandemic situation, we had planned to postpone the wedding to December. However, my family felt that it would be very cold in my hometown during that month. So, we went ahead with the original date. Around 100 people, including our relatives and my friends from Delhi and Mumbai, attended the wedding. The pre-wedding rituals — mehendi and shagun — took place on October 26 and 27, and the haldi took place on the morning of October 28," revealed Vishal to Bombay Times. Janmashtami 2020: Nitish Bharadwaj, Swapnil Joshi, Sourabh Raaj Jain, Sumedh Mudgalkar - Actors Who Aced The Portrayal of Maakhan Chor Lord Krishna on Television!.

Talking about why he kept his relationship under the wraps all this time, Vishal revealed, "I have never been vocal about my relationship. I like to keep it private and prefer not to talk about it at all. Heena and I dated way back in 2001 when I was a student in Chandigarh, but we lost touch eventually. I wished her on Instagram on her birthday on April 15 last year and got talking. We have been dating since. I have known her for 20 years of my life.”

He further went on to reveal, "Of course, we have a history. When I reconnected with Heena, I realised that we were so alike. I love to travel, be in the mountains and she loves that, too. Both of us love reading. There are many things in common, including our expectations from life and perspective towards it. She has completed her Masters in Business Administration and has worked for various companies. However, since the last couple of years, she is focusing on her art."

"She paints very well. She is a potter and wants to set up her own pottery studio. That’s the kind of life even I want to lead. I have been in Mumbai for 12 years, but I see myself exploring different things and having a life beyond showbiz. She strikes a proper balance in that sense. We understand each other really well," revealed a happy Vishal.

“We might just fly to Goa in mid-November before my birthday. I will get my car from Mumbai to Goa and then go on a road trip to South India,” concluded Vishal.

(The above story first appeared on LatestLY on Nov 04, 2020 04:05 PM IST. For more news and updates on politics, world, sports, entertainment and lifestyle, log on to our website latestly.com).