Vishal Karwal On His First Lord Krishna Act: 'My Producer Suggested That I Watch the Old 'Mahabharat', But I Was Determined to Do My Own Thing'

And on the occasion of the actor's show Dwarkadheesh - Bhagwan Shree Krishn, Vishal, while reminiscing his first Krishna gig, revealed that the role will always remain his my most cherished role. 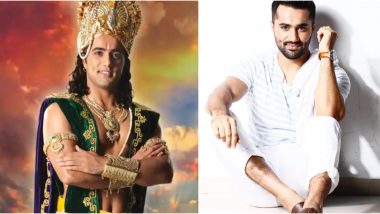 While Nitish Bharadwaj might have been the first Krishna of Indian television and that too a favourite with the audience in B.R.Chopra's Mahabharat, actor Vishal Karwal also made his place on the hearts of the audience with his portrayals of the 'dimpled' Lord Krishna on Indian Television. Vishal first gained popularity for playing Krishna in Dwarkadheesh - Bhagwaan Shree Krishn and has reprised the lord's role in Nagarjuna – Ek Yoddha, Paramavatar Shri Krishna and Dwarkadheesh - Bhagwan Shri Krishna Season 2. Janmashtami 2019: Sourabh Raaj Jain, Sumedh Mudgalkar, Vishal Karwal – 5 Actors Who Have Effortlessly Portrayed the Role of Lord Krishna on Small Screen!.

And on the occasion of the actor's show Dwarkadheesh - Bhagwan Shree Krishn returning for a re-run on television, Vishal, while reminiscing his first Krishna gig, revealed to TOI, "The show had done extremely well when it was originally aired nine years ago. I am sure that many people will be happy to watch Lord Krishna’s miraculous life again on the small screen. Also, in this time of distress, it’s nice that the channel has decided to bring back such culturally-rooted shows, which help spread positivity and motivate viewers." Krishna Janmashtami 2018: From Akshay Kumar to Swwapnil Joshi- These 5 Actors Won Won Our Hearts as Lord Krishna.

He also revealed that his director had asked him to look up Nitish Bharadwaj's act of Krishna. "After signing the show, my producer suggested that I watch the old 'Mahabharat' to understand the nuances of the character. However, I was determined to do my own thing and find my ground. I did intense research and read many scriptures to understand every aspect of Lord Krishna. I must admit it took me some time to embody the character authentically since I was playing a mythological character for the first time. This will always remain my most cherished role."

(The above story first appeared on LatestLY on May 16, 2020 03:14 PM IST. For more news and updates on politics, world, sports, entertainment and lifestyle, log on to our website latestly.com).