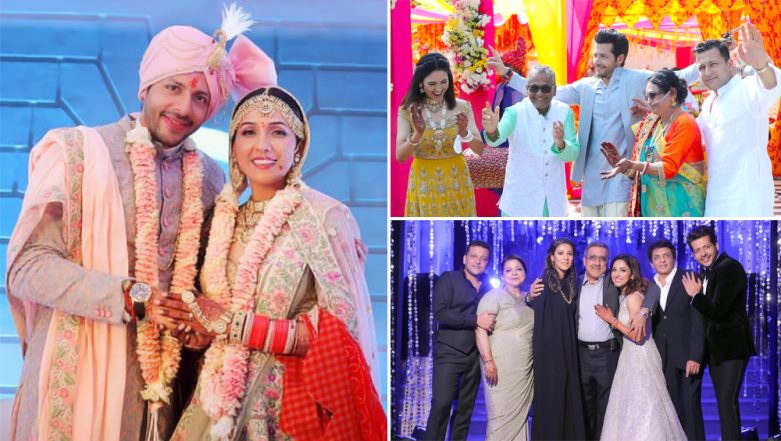 Neeti Mohan and Nihaar Pandya are now man and wife. After playing hide-and-seek with the media for almost a year now, the couple accepted their relationship publicly on a recent episode of Sony TV's The Kapil Sharma Show, where Nihaar accepted that he had developed feelings for Neeti back when she was a part of the famous band Aasma. He also revealed how things did not fall into place for him, despite him asking his friend and a co-band member to introduce him to Neeti. Ayushmann Khurana, Aparshakti Khurana and Tahira Kashyap Give Us Inside Details Of Neeti Mohan and Nihaar Pandya’s Mehendi!

Apparently, it was fate that wanted the pair to be together as they met a year later at a friend's wedding and Goa and things got moving for Nihaar. Recalling his filmy proposal, Nihaar had mentioned how right after he had asked Neeti to marry him, flowers from a tree they were standing under, started falling on them. Nihar Pandya-Neeti Mohan Wedding: On ‘The Kapil Sharma Show’, Manikarnika Actor Reveals How He Proposed to His Singer Fiancee

The pair's nuptials started on February 14, with the mehendi, followed by the sangeet and ring ceremonies the same night. And today was their D-Date.

And finally, pictures of the couple are out now:

With the blessings of family, friends and well wishers, we are blissfully married. Dad's health is getting better each day. The Mohan and Pandya family THANK YOU for your constant love and support 🙏

Neeti also addressed the issue of her father's frail health and conveyed to everybody that her father was doing much better now. Both Neeti and Nihaar were twinning in baby pink outfits. While Neeti's lehenga looked heavily embellished with intricate thread embroidery, Nihaar's sherwani was full of floral prints.

While their wedding was a very intimate affair, the couple plans to host a reception in Mumbai for their industry friends soon. We congratulate Neeti and Nihaar on their wedding and wish the couple a happy married life ahead.