OTT Releases Of The Week: Parineeti Chopra's The Girl On The Train, Abhay Deol's 1962 – The War On The Hills on Disney+ Hotstar and More

February 2021 is almost going to end and there are some interesting series and movies releasing on OTT platforms Like ZEE5, MX Player, Disney+ Hotstar and Netflix. Talking about the biggest release of the film is The Girl on the Train which is all set to premiere on Netflix from February 26. 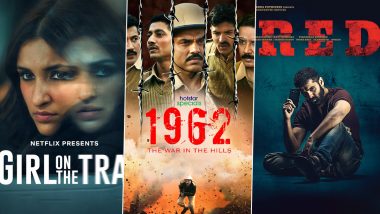 Poster of The Girl on the Train, 1962: The War on the Hills, Red (Photo Credits: Twitter)
February 2021 is almost going to end and there are still some interesting series and movies releasing on OTT platforms like ZEE5, MX Player, Disney+ Hotstar and Netflix in the last week. Talking about the biggest release of the week, it would be The Girl on the Train which is all set to premiere on Netflix from February 26. Directed by Ribhu Dasgupta, the film is a remake of a Hollywood thriller, which itself is based on British author Paula Hawkins' popular 2015 debut novel of the same name. The remake stars Parineeti Chopra, Avinash Tiwary, Aditi Rao Hydari and Kirti Kulhari. The Girl on the Train Trailer: Is Parineeti Chopra a Murderer or Not? Watch the Actress Take You On ‘One Hell of a Ride’.
Another big release of the week would be 1962: The War in the Hills, which is all set to premiere in Disney+ Hotstar on February 26. Inspired by the real-life stories around the the Sino-Indian War, the war-drama series is directed by Mahesh Manjrekar with Abhay Deol starring in the lead role. There are few international films also  lined up to release on Netflix and you might not want to miss them also. The list includes Spanish movie Crazy About Her, Japanese movie High Rise Invention and also a Documentary named Canine Intervention. 1962 The War In The Hills Teaser: Witness Abhay Deol’s Valour as an Army Officer On Disney+ Hotstar From February 26 (Watch Video).
Let's quickly take a complete look at the movies and series releasing on the OTT platforms this week:
Series Releasing This Week
Alt Balaji | ZEE5
1. Dev DD S2: February 20, 2021
Sony LIV
1. Riviera S3: February 26, 2021
MX Player
1. Hello Mini S2: February 26, 2021
Disney+ Hotstar
1. Snowfall S4: February 25, 2021
2. 1962: The War on the Hills: February 26, 2021
Movies Releasing This Week
Netflix
1. Red: February 23, 2021 | Telugu
2. Canine Intervention: February 24, 2021 | Documentary
3. High Rise Invention: February 25, 2021 | Japanese
4. Crazy About Her: February 26, 2021 | Spanish
5. The Girl on the Train: February 26, 2021 | Hindi
So which series/film are you most excited about? Share your thoughts in the comments section below.

(The above story first appeared on LatestLY on Feb 24, 2021 02:22 PM IST. For more news and updates on politics, world, sports, entertainment and lifestyle, log on to our website latestly.com).

Comments
Tags:
1962: The War on the Hills Alt Balaji | ZEE5 Canine Intervention Crazy About Her Disney+ Hotstar High Rise Invention Movies and Series in OTT Netflix OTT platforms The Girl on the Train
Comments
You might also like