The Girl on the Train Trailer: Is Parineeti Chopra a Murderer or Not? Watch the Actress Take You On ‘One Hell of a Ride’

She embarks on a journey to find out the truth and it will be fun to see how her journey unfolds. We get to see a few glimpses of Avinash romancing Parineeti and we think the audience will enjoy their chemistry. 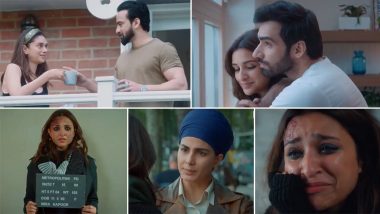 The Girl on the Train Trailer (Photo Credits: YouTube Stills)

Parineeti Chopra starrer The Girl On The Train is one of the most anticipated films of the year. The teaser of the film got a positive response from the audience and Parineeti managed to impress them with her acting already. Recently, the other characters of the film were also introduced to the fans which lead to an increased excitement amongst the audience for the Hindi remake. After a short wait, the makers have now unveiled the adrenaline-filled trailer of the film as they promise to take you on 'one hell of a trip'. The Girl on the Train Teaser: Parineeti Chopra’s Curious Self Leads Her to a Dark Past.

The trailer of The Girl On The Train begins with Parineeti introducing her character and telling how she is obsessed with Aditi Rao Hydari's character. Aditi is a happy married woman and Parineeti is jealous of her because she has everything Parineeti had in the past. A few shots of how things go bad for Parineeti after her husband (Played by Avinash Tiwary) meets an accident, follow the scene. Next, we get to know that Aditi's character is murdered and Parineeti is suspected to be the killer.

The trailer takes a turn here when you learn that Parineeti suffers from short term memory loss and has forgotten what happened on that day. She embarks on a journey to find out the truth and it will be fun to see how her journey unfolds. We get to see a few glimpses of Avinash romancing Parineeti and we think the audience will enjoy their chemistry. Kirti Kulhari as a police officer also looks appealing. Check out the thrilling trailer of The Girl On The Train here:

Earlier, speaking about the prep of Parineeti's character for The Girl On The Train, director Ribhu Dasgupta told Mumbai Mirror, "We prepped a lot in Mumbai before arriving here (London) but a character actually shapes up only during the shoot and I can see it happening beautifully, right in front of my eyes. We have chosen a colour palette of black, grey, brown and deep green for Parineeti, with a focus on her dialogue delivery and body language. It’s an exciting process." The Girl On The Train: Makers Reveal Aditi Rao Hydari, Kirti Kulhari, Parineeti Chopra, Avinash Tiwary’s Character Posters From The Mystery Thriller!

The Girl On The Train is based on the 2015 bestseller by Paula Hawkins by the same name. The book also has a Hollywood adaptation of itself which featured Emily Blunt in the lead role. The Hindi adaptation is produced under the banner of Reliance Entertainment. The film that was initially scheduled to be released in May 2020 and had to be postponed due to coronavirus pandemic. The film will now release on Netflix on February 26.

(The above story first appeared on LatestLY on Feb 03, 2021 03:49 PM IST. For more news and updates on politics, world, sports, entertainment and lifestyle, log on to our website latestly.com).