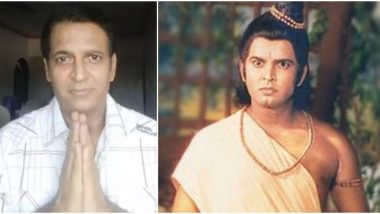 It was one of the proud moments for all Indians on August 5, 2020, when PM Narendra laid the first brick during Ram Mandir's Bhumi Pujan in Ayodhya that took place keeping in mind the COVID-19 crisis. Reportedly, as many as 175 guests were invited for the event. Having said that, social media was full of positive tweets celebrating the auspicious occasion. Even onscreen Ram (Arun Govil) and Sita (Dipika Chikhlia) had expressed their joy. Now, adding to the same, it's Sunil Lahri who played the role of Ram's brother, Laxman in Ramanand Sagar's show Ramayan has reacted to the historic moment. Ram Mandir Bhumi Pujan in Ayodhya: Ramayan Actors Arun Govil and Dipika Chikhlia Express Their Happiness on the Auspicious Occasion (View Posts).

In an exclusive interview with ETimes TV, the actor expressed how the Ram Mandir Bhoomi Pujan marked our second freedom. He said, "This moment is like second freedom for our country. In the month of August, we celebrate our Independence Day and now we have another reason to celebrate. I think the struggle which was going on since the last 500 years has now finally come to an end."

"This bhoomi pujan, is the new beginning for a progressive country. I think Lord Ram's exile which lasted for 500 years has finally come to an end. He has a home now, he will stay in the temple which will be made now. Everyone will have his blessings and this is a way towards Ram Rajya," he added. Ram Temple Bhoomi Pujan in Ayodhya: Here is PM Narendra Modi's Full Itinerary For The Ram Mandir Event on August 5.

Lauding the Ram Mandir verdict, Sunil said," I am not in favour of any Government but I would definitely say that the central government is doing a tremendous job. Their efforts have given some good results." Well, indeed, this one is surely a win for every Indian irrespective of the religion. Stay tuned!

(The above story first appeared on LatestLY on Aug 05, 2020 08:15 PM IST. For more news and updates on politics, world, sports, entertainment and lifestyle, log on to our website latestly.com).