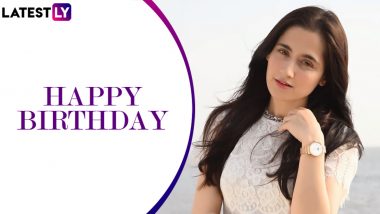 Actress Sanjeeda Sheikh is without a doubt one of the most beautiful women that the television industry can boast of. Known for her dancing moves and easy to work with attitude, Sanjeeda Sheikh is also considered as one of the most versatile and experimental actress that the industry has seen in a long time, after all who would at that point in time taken up a negative role as their second show, after bagging the lead role and praises in their debut show? Moving on, as the actress rings in her 35th today, here are some fun facts about the actress. Hot Alert! Mouni Roy-Sanjeeda Sheikh's Lip Kiss During Naagin Actress' Housewarming Party is Sexy, Video Goes Viral

Sanjeeda Sheikh, who originally hails from Ahmedabad, Gujarat, was born on December 20, 1984 in Kuwait.

Sanjeeda who is known for her graceful dance moves, actually moved to Mumbai to become a choreographer and open a dance studio with a friend. But looks like fate actually had other plans for Sheikh.

LIFE IS A DANCER AND YOU ARE THE DANCE 🎈

The extremely pretty actress started her career with a cameo appearance in Baghban. But her full-fledged debut came in the form of her 2006 show Kya Hoga Nimmo Ka.

Sheikh is also one of those actresses who risked playing a negative role in her second TV show Kayamath, that won her awards and accolades alike.

Despite enjoying a long and successful career, Sanjeeda's most popular show is her 2014 thriller Ek Hasina Thi that won her immense recognition and made her a household name.

Sheikh married her boyfriend of seven years, actor Aamir Ali in 2012 and they have been setting couple goals ever since.

It is also said that the actress has a 'no kissing' clause in her contract and falling into that perview is also her husband Aamir Ali. Sanjeeda is also said to have had discussions with her show makers verbally too regarding this clause.

By my side and in my ❤️always #happyvalentinesday @aamirali 😘😘 #love

The pretty actress has surprisingly courted controversy when her sister-in-law had filed a domestic violence case against her and the Sheikh family.

Happy makarsankranti🎈🎈.. #makarsankranti THE EYES TELL MORE THAN WORDS COULD EVER SAY♥️ 📷 @nikkiee309 Jewellery by - @the_jewel_gallery

Recently, Sanjeeda was in the news for her alleged spat with bestie Mouni Roy. The reason for their spat is unknown and both the pretty ladies haven't commented on the same.

Here's wishing the pretty, versatile actress a very happy and successful year ahead.

(The above story first appeared on LatestLY on Dec 20, 2019 05:09 PM IST. For more news and updates on politics, world, sports, entertainment and lifestyle, log on to our website latestly.com).