Actor Kay Kay Menon says he lacks the skills to promote or market himself, adding that his expertise lies in performing and not promoting. Despite being a revered actor, Kay Kay is still an enigma to many. The actor hardly ever uses social media. 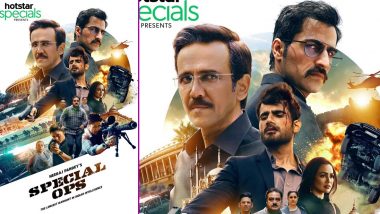 Actor Kay Kay Menon says he lacks the skills to promote or market himself, adding that his expertise lies in performing and not promoting. Despite being a revered actor, Kay Kay is still an enigma to many. The actor hardly ever uses social media. Asked if self-promotion is something he avoids or doesn't like, he replied: "I don't have the expertise in that department, I seriously lack the skill to market myself. Some people have it and they are blessed, but I don't think I have expertise to promote myself. Karan Tacker on His Web Debut – ‘Nothing That Came My Way Left Me Charged Until Special Ops’

He added: "I like to promote my work. I do the promotion for my work because that is required. Apart from that I just don't know how to promote myself, to be honest, I think my work ideally should speak for itself. I have expertise of performing, not promoting." Kay Kay's latest role, as RAW agent Himmat Singh in Neeraj Pandey's web series "Special OPs", has won him lots of acclaim. In fact, even superstar Hrithik Roshan praised the entire cast and crew of the show in a video post. "I've already thanked him (Hrithik) on social media. It feels good that suddenly someone has seen this series and appreciating it wholeheartedly, and you can see it in their eyes that it has come from the heart,"Kay Kay said. Neeraj Pandey Gave a Tribute to Bollywood with His Hotstar Series Special Ops, Here’s How.

About bringing alive Himmat Singh, he said: "When I perform, I perform people. I don't perform roles. So, that's my basic difference. If I am playing Himmat Singh in 'Special Ops', I am playing Himmat Singh only. His being a RAW officer is secondary thing. My idea is to play the person more than the role. While preparing, first I figured out what Himmat Singh is all about. After that my process becomes very simple. I surrender to it. I surrender my ego, my personality and I listen to only that person's call." Special Ops is an espionage thriller series created for Hotstar. The series is co-directed by Neeraj Pandey and Shivam Nair.

(The above story first appeared on LatestLY on Apr 09, 2020 11:23 AM IST. For more news and updates on politics, world, sports, entertainment and lifestyle, log on to our website latestly.com).