Visibly clueless, Abhishek Banerjee fumbled and somehow managed to read out the written question during the Question Hour. 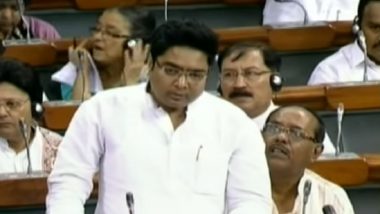 New Delhi, Aug 1: Trinamool Congress (TMC) MP Abhishek Banerjee, who is nephew of West Bengal Chief Minister Mamata Banerjee, made a laughing stock of himself when he stood in Lok Sabha to ask a question on Tuesday. Visibly clueless, Abhishek Banerjee fumbled and somehow managed to read out the written question during the Question Hour.

A question was listed as a ‘starred’ question jointly in Abhishek's name along with TRS parlimentarian K Kavitha. Since Kavitha was not present, Speaker Sumitra Mahajan called out Abhishek’s name. He, however, seemed puzzled, prompting Mahajan to tell him: “Your question has come. Leave it if you forgot". This made other parliamentarian laugh.

Even when Abhishek stood up for asking the question, he fumbled. Senior TMC members - Sugata Bose and Saugata Roy - came to his rescue and guided him. He then asked setting up centres of excellence (CoE) for technological development, its state-wise location in the country and how CoE contibuted to the manufacturing sector.

Responding to Abhishek, Union Minister of State for heavy industries Babul Supriyo said, “First of all, I would really want to thank our learned senior member, Saugata Roy, for doing the necessary thing to remind him about the question that has been asked."

(The above story first appeared on LatestLY on Aug 01, 2018 10:54 AM IST. For more news and updates on politics, world, sports, entertainment and lifestyle, log on to our website latestly.com).