Railway Minister Ashwini Vaishnaw, in his tweet, wrote "Thanks to PM @narendramodi Ji on behalf of entire rail parivar for sanctioning the productivity-linked bonus for 78 days." 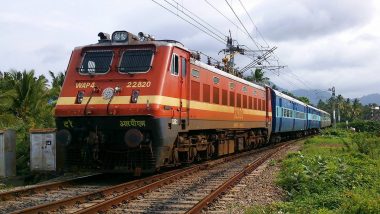 With this, about 11.27 lakh non-gazetted Railway employees are likely to benefit from the decision, and the payment will be made before the Dussehra holidays, bringing smiles to lakhs of families ahead of the festive season. Railway Minister Ashwini Vaishnaw, in his tweet, thanked PM Modi for the approval and wrote "Thanks to PM @narendramodi Ji on behalf of entire rail parivar for sanctioning the productivity-linked bonus for 78 days." (sic) Indian Railways Introduce RTIS System To Give Passengers Real Time Information of Trains.

Thanks to PM @narendramodi Ji on behalf of entire rail parivar for sanctioning the productivity-linked bonus for 78 days. pic.twitter.com/PI3bexCXQC

The centre, in the statement, said, "the payment of PLB would serve as an incentive and result in motivating a large number of railway employees, particularly those involved in the execution and operations of railways, to improve their productivity and ensure safety, speed, and service for railway customers." 7th Pay Commission: Good News on DA Hike Likely Tomorrow, Here's How Much Increase in Dearness Allowance Expected.

A few days back, the government had also increased the Dearness allowance (DA) of the Central government employees by 4 percent, making it 38% from 34% earlier. Along with the DA, the Dearness Relief (DR) for retirees was increased by the same proportion in line with the DA.

(The above story first appeared on LatestLY on Oct 03, 2022 02:49 PM IST. For more news and updates on politics, world, sports, entertainment and lifestyle, log on to our website latestly.com).