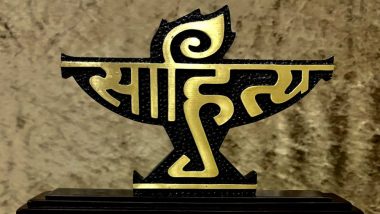 The awards were recommended by jury members in respective languages and were then approved by the Executive Board of India's national academy of letters under the chairmanship of Akademi President Chandrashekhar Kambar.

Akademi Secretary K. Sreenivasarao said at a press conference announcing the winners that the books were selected on the basis of recommendations made by a jury of three members in each language in accordance with the rules.

The awards relate to books first published during the five years immediately preceding the year of award, between January 1, 2012 and December 31, 2016.

The awards, in the form of a casket containing an engraved copper-plaque, a shawl and a cheque of Rs 1 lakh, will be presented to the authors at a special function in January next year at Kamani Auditorium. The Sahitya Akademi award is among the most prestigious literary honours bestowed on writers for their works across genres and languages.

The Akademi also announced its Bhasha Salman for the year 2017 and 2018. Yogendra Nath Sharma was awarded the Bhasha Salman for the North zone; G Venkatasubbiah for South zone; Gagendra Nath Das for the Eastern zone; and Shailaja Bapat for the Western zone.  The Akademi will also be hosting a national seminar on Mahatma Gandhi in January next year, tracing his presence in the literary space.

(The above story first appeared on LatestLY on Dec 05, 2018 04:45 PM IST. For more news and updates on politics, world, sports, entertainment and lifestyle, log on to our website latestly.com).